Yes (with sugar free cranberry juice!).  He also orders a strawberry daiquiri with three umbrellas, a Robitussin and tonic .........

Calm down.  James Bond doesn't actually order those  cocktails in the movies or novels.  Fortunately Daniel Craig, who has played 007 in four movies, has an excellent sense of humor.  Watch below or click here to see a hilarious clip from Craig's recent appearance on Jimmy Kimmel Live.

Thanks to my friend (and fellow Bond geek) Sarah for telling me about this clip.

If you want to read more about the drinking habits of 007 and his creator, look at James Bond's ABC and Drinking Like Ian Fleming.  Or just click the James Bond archive tab on the right to see everything the Den has to offer about Bond, James Bond.

What makes a vodka martini more intense?  Belvedere Intense vodka.  Belvedere, which is now James Bond's vodka, issued this limited release earlier this year.  My wife and I had the pleasure of discovering it while going through duty free at Heathrow Airport in London. 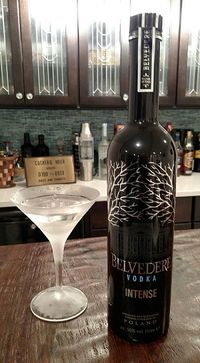 So how did Ian Fleming, who wrote the novels, come up with the Double O label?  Thanks to Stewart, a fantastic guide for the James Bond walking tour at Brit Movie Tours, I learned the answer -- 007 was a German diplomatic code during World War I.  British intelligence cracked the code and intercepted what is now known as the Zimmerman Telegram, which influenced the decision of the United States to enter the war.

Now you've had a cocktail knowledge shot with a history back. Cheers!

Variation on a Vesper Sometimes changing one ingredient transforms an entire cocktail.  The Vesper is no exception.  I made my version of this classic 007 cocktail, which James Bond himself created, with Bianco Ambrato vermouth from Mancino Vermouth.  Full disclosure -- I did not receive any compensation, but Giancarlo Mancino generously gave me a free bottle when I met him at Tales of the Cocktail earlier this year.  I also met the U.S. distributor, so we can get it through the Internet.

Combine in a shaker with ice, shake con passione as if you were with a Bond girl or Bond (depending on your preference), and strain into a chilled glass.

The Bianco Ambrato has a distinctive flavor compared to other dry vermouths.  It strikes the delicate balance of asserting itself without overpowering the entire cocktail.  Bravo! 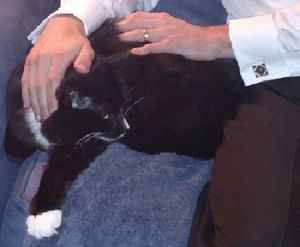 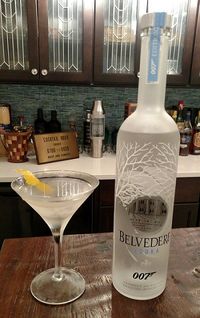 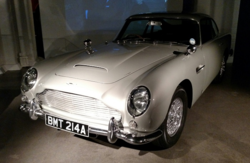 During my recent journey to London I had all sorts of James Bond related experiences.  They included a great walking tour courtesy of Brit Movie Tours (the motto of the tour should be "For Bond Geeks And The People Who Love Them"), a fascinating exhibit entitled Bond In Motion at the London Film Museum, and a cocktail at Dukes Hotel bar. 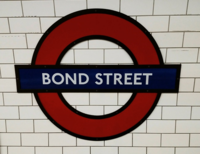 Why Dukes?  Because it was Ian Fleming's favorite watering hole.  Yes, that Ian Fleming, the man who wrote the James Bond novels.  Amusingly, after watching Dr. No (the first movie) he thought the character's adaptation to the silver screen was a disaster.  After 24 (and counting) films in more than 50 years, clearly he was wrong.

Rumor has it that Fleming coined the iconic phrase "shaken not stirred" for the James Bond martini while imbibing at Dukes.  Dukes has embraced its connection to Fleming and his literary creation, as much of its cocktail menu has a James Bond theme.

Another reason why Dukes might be for your eyes only -- the place makes martinis to die for.  Or live and let die for.  Or give you a license to kill for.  You get the idea.

As in Alcoholic Body Count.  Thanks to an infographic from Food & Wine, you can just see how much 007 drinks in every film (23 and counting).  Click here to read it.  You might learn some interesting things, e.g. Daniel Craig drinks more than his counterparts.  Thanks to my wife for finding this for me.

Readers of the Den know I'm a big James Bond fan.  If you want to see Sir Roger Moore's version of 007 cocktail's here, or for a cocktail tribute to my favorite Bond girl click here.

If you want to learn about what Bond drinks in the movies (as opposed to how much), I recommend 007 On the Rocks by Stephan Kurr.  The book is a quick and informative read.

So (cue the theme music), we'll have to see how much Bond drinks when SPECTRE comes to the silver screen later this year.

Martini, Vodka Martini.  This is 007's cocktail.  Of course, martinis predated the literary and cinematic franchise that Ian Fleming spawned.  However, those martinis used gin.  Due to my obsession with James Bond, I've read a lot about his drinks and drinking habits (I even attended a seminar) and contributed to the discourse, e.g. click here to read about a cocktail I associate with the movie Goldfinger. 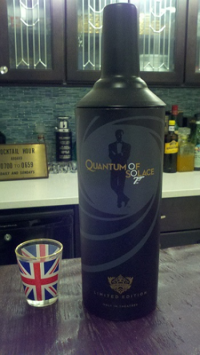 This recipe comes from a man who knows a lot about James Bond -- Sir Roger Moore.  With apologies to Sir Roger, I changed the recipe  ever so slightly:

Pour the vermouth in a martini glass, swirl it around, then pour the excess into a shaker.  Swirl the vermouth around the shaker, and discard the remainder.  Put two ice cubes and the vodka into the shaker, shake as if you're maneuvering an Aston Martin DB 5 around Blofeld's trap, then put the shaker and the glass in the freezer.  Wait 30 minutes (if you can) and strain the shaker's contents into the glass.  Garnish with lemon.

Click here for an article in the Guardian in which Moore discusses how he makes a vodka martini.  Even though I really like Zyr, use whichever vodka you prefer.

You'll notice that a shaken vodka martini clashes with the Hamlet Cocktail Conundrum.  Why shake a cocktail that has no citrus or egg white?  Shouldn't you stir it?  Technically you should stir, not shake.  But in the spirit (pun intended) of James Bond, dare to be different.  There will be no spectre of a weak drink.

Cocktails are by no means my only interest and passion.  I am also a big fan of the James Bond franchise.  I probably could write a blog about James Bond related things, but there are far more cocktail fans in the world than Bond fans.  Of course, there is a lot overlap between these two groups.  In addition, the literary and cinematic character himself is a prodigious drinker, and according to this tongue-in-cheek study from The Lancet (the British counterpart of the American Medical Association Journal, click here to read it) a very high functioning alcoholic.

Every James Bond fan has their favorite movie, and I am no exception.  My favorite is Goldfinger, which is the third one in the franchise.  It has the just the right amount of everything – the rough and tumble version of the hero (the archetypal Sean Connery played him), a resonant title number (sung by Shirley Bassey), a classic line from the villain (“No Mr. Bond, I expect you to die!”), and a memorable Bond girl (thank you Honor Blackman) – Pussy Galore.

I must give credit to where it is due, so thanks to Beer Barrel bourbon to introducing me to this cocktail at the Tales Of The Cocktail conference.  Here is how you make it: 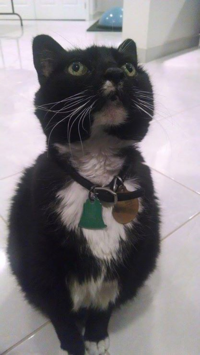 That cocktail looks much tastier than fish!

Combine in shaker with ice, shake like you’re a cat who knows it is on its way to the vet (you thought I was going to say something much dirtier, didn’t you?), and strain into a chilled glass.

Those of you who follow the Den will notice that there are some similarities between this cocktail and the Siesta, part of the Grapefruit Triad.  More specifically, both drinks contain fresh grapefruit juice and Campari.  Of course, the big difference is that this cocktail has bourbon as its base, and tequila is the base of the Siesta.  To me it is fitting that bourbon is the base spirit of the cocktail with which I associate Goldfinger.  James Bond drinks bourbon in the movie; he does it in the scene where Goldfinger explains why he wants to break into Fort Knox (spoiler alert -- he doesn't plan to steal the gold).

If you like tart cocktails, then this one is right up your alley (cat).