A Dantean Cocktail -- The Purgatory

In some theologies, purgatory is the state after death before some souls ascend to Heaven. It's also the title of the second book in Dante's Divine Comedy (one of my favorite college classes was about The Inferno). Dante Aligheri in Florence created one of the most famous pieces of Western literature, and Ted Kilgore in Missouri who created the Purgatory cocktail in the mid-2000s. 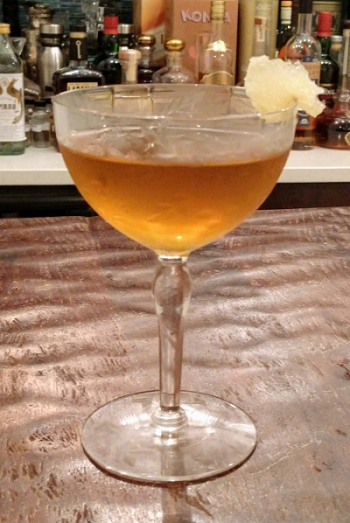 Combine in a mixing glass with ice, stir while contemplating where your soul might go (mine will travel in the bar car), and strain into a chilled glass. Lemon peel or wedge garnish optional.

Make no mistake, the Purgatory is a powerful drink. Those who are new to cocktails might have one and think they have descended into one of Dante's circles of Hell. The spice in the rye may make you think of Hell, and the silky sweetness of the Benedictine DOM may make you think of Heaven. The rye stands up to the Benedictine DOM, used in drinks such as the Honeymoon or my Whiskey Queen, and the 110 proof green Chartreuse, used in drinks such as the Bijou and the Last Word. Combining two herbal liqueurs from French monastic orders looks strange, at least it did to me. Have some cocktailian faith. You'll find they work well together in the Purgatory.

Regardless of whether you're religious, agnostic, or atheist, warm your soul with a Purgatory.