Leaving a lasting impact in fields such as art, science, and literature, the Renaissance was an important era in Western history. The cocktail renaissance (French for "rebirth") began in the early 2000s. The genesis of the Renaissance cocktail is unclear, but I discovered this version in Difford's Guide. 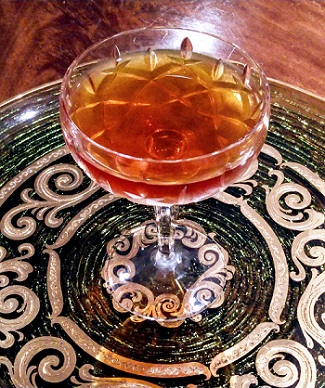 Combine in a mixing glass with ice, stir with the joy of being revived or reborn, and strain into a chilled glass, preferably a coupe. Orange twist garnish optional.

Courtesy of the cognac, a key part of the Burnt Fuselage, the Renaissance has a spirited start. You can use brandy instead, as it's also derived from torched Dutch grapes. The sweet vermouth and limoncello soften the cognac's punch. Peach bitters are unusual, but as with the Whiskey Queen, they give the Renaissance a nice finishing flourish. If you need a quick substitute, try orange bitters. The drink has no connection to my Bourbon Renaissance, which is a little bit sweeter. Want to pair the Renaissance with modern music?  Try anything by the Rebirth Brass Band or Revival by the Allman Brothers.