And Cocktail -- The Ampersand

Signifying "and," the ampersand is a common symbol in the English language (& it makes me think of the late great musical genius Prince). The ampersand symbol dates back a couple of centuries, when children were taught it was the 27th letter of the alphabet. The Ampersand cocktail dates to 1934, when it appeared in Albert Stevens Crockett's The Old Waldorf-Astoria Bar Book. The story is the Ampersand was named for the "&" in Martini & Rossi vermouth. 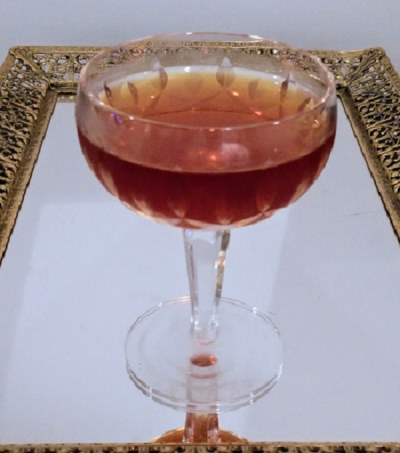 Combine in a mixing glass with ice, stir & stir & stir, then strain into a chilled glass.

The Ampersand is a boozy cocktail. The base of three spirits in equal proportions is reminiscent of other underrated classic drinks such as the Bijou. Brandy and Old Tom style gin together? Yes, it looks weird, but it works. Combining Old Tom style gin and sweet vermouth is part of the classic Martinez, so if you like that drink you'll like this one (& vice versa). You could use the more prevalent London Dry style gin in an Ampersand, but then the drink won't be quite as complex (this is one of those times when complexity is a good thing). Curaçao is a type of triple sec (orange liqueur), and if you don't have curacao, Grand Marnier is a good substitute.

Now have some fun & go make yourself an Ampersand!