You may have made and thrown one as a kid. As an adult, you can drink one. The Paper Plane flew onto the scene in 2008 when Sam Ross, the New York City bartender who created the Penicillin, created it for the opening of The Violet Hour bar in Chicago. Named for the M.I.A. song Paper Planes, it took off in Chicago and New York and made its way onto cocktail menus around the world. 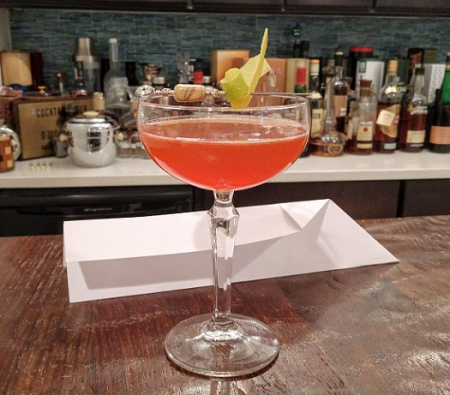 Combine in a shaker with ice, shake to the theme from Rocky (the tune's title is "Gonna Fly Now"), and strain into a chilled glass, preferably a coupe. Lemon peel garnish optional.

Following the equal proportions of four ingredients format of the Last Word, the Paper Plane is easy to make (the same goes for the Naked and Famous). Bourbon and Aperol, used in cocktails such as the Venetian Kiss, are easy to acquire. Amaro Nonino, a bittersweet grappa based amaro from northern Italy, can be tougher to find, but thankfully we have the Internet. Originally the Paper Plane used Campari, but within days of unveiling it Ross changed his mind and used Aperol instead. The result is a really well balanced cocktail. In terms of balance and format, the Paper Plane more resembles the thematically similar Burnt Fuselage than the Aviation.

Looking to rack up some cocktail frequent flier miles? Then it's time to board the Paper Plane.