Hailing from France, Lucien Gaudin was an Olympic champion fencer in the 1920s.  Fencing as in trying to stab someone with one of three blade types.  Unlike the clear record of Gaudin's victories in three different Olympics (I'm a huge fan of the movie Chariots of Fire, part of which takes place at the 1924 Olympics in Paris), the origin of the Lucien Gaudin cocktail is hazy. 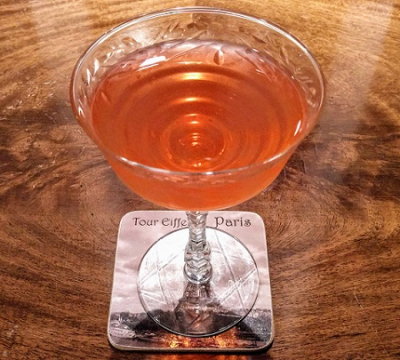 Combine in a mixing glass with ice, stir with the strategic precision of a fencer, and strain into a chilled glass. Orange peel garnish optional.

Some people describe the Lucien Gaudin as a variation on the classic Negroni. To me it's more Negroni adjacent. A true variation would have equal proportions of three spirits and some crossover. The Bijou and the Luck of the Irish are good examples. I know this is a fine point (pun intended). Cocktail technicalities aside, the Lucien Gaudin is lighter than a Negroni and is very pink. Do you like French themed cocktails? Try a Champs Elysees or a Burnt Fuselage.  Want something more on point (sorry, I can't help myself)?  Try an Ides of March or a Stiletto.

Have a Lucien Gaudin, cue the Chariots of Fire theme, and be victorious!