Not North But -- The Southside

Like drinks such as the Margarita and the Jack Rose, the origin story of the Southside is hazy. In the late 19th century the Southside Sportsmen's Club in Long Island featured an eponymous cocktail with soda water. During Prohibition, the no fizz Southside became associated with two cities. New York was home to the 21 Club, a premier speakeasy that served a lot of them to thirsty Scofflaws. It also was popular on the South Side of Chicago, where the Racketeer Al Capone plied his trade. This is the variation I prefer. 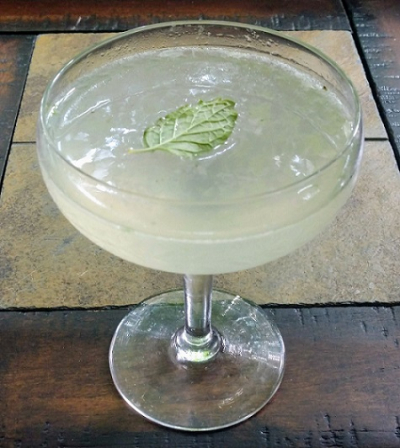 To make the Southside, you have two options: (1) Muddle the mint and super simple syrup in a shaker, then add everything else and ice, shake as if you're playing in a tough tennis match, and strain into a chilled glass, or (2) combine everything in a shaker with ice, shake as if you're fighting for control of organized crime, and strain into a chilled glass.  Mint leaf garnish optional.

Lemon or lime? Fresh squeezed juice or citrus wedges? Muddle or not? Granulated sugar or super simple syrup? Ask five bartenders and you may get five different answers. As long as you stick to the basic formula (gin sour and mint), there's no wrong answer. If you use lime, the Southside more or less becomes a gin Mojito. Gin and lemon go well together in the Bee's Knees and the Lemony, and they do here, too.

Pairing the refreshing Southside with music I can go to multiple destinations. Maybe I'll go Southbound with the Allman Brothers, to Sweet Home Chicago with Buddy Guy or the Blues Brothers, or to New York, New York with the one and only Frank Sinatra. All of these musical options are like the Southside itself -- many ways to get there, all of them good.