A Drink Of Pride -- The Lion's Tail

There are many myths about lions. For example, they don't have a king (sorry Disney fans) or live in jungles. One truth is a lion family is known as a pride. The Lion's Tail first appeared in 1937 in the Café Royal Cocktail Book. Reputable sources speculate an American expat bartender created the Lion's Tail in Britain during Prohibition, and the expression "twisting the lion's tail" originally referred to provoking Britain (a lion is on its coat of arms). 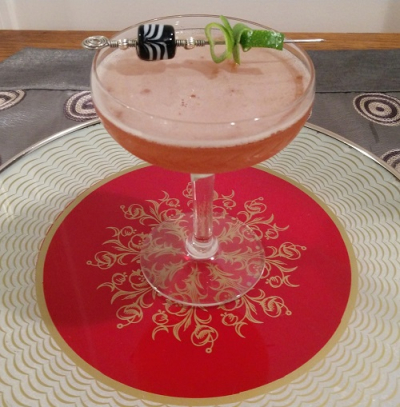 Combine in a shaker with ice, shake with the power of a lion's roar, and strain into a chilled glass, preferably a coupe. Lime peel garnish optional.

Mixing common and uncommon ingredients, the Lion's Tail works better than you might think. Its use of bourbon,  legally an American spirit, supports the theory the Lion's Tail had an American creator. Incorporating allspice dram, a rum based liqueur you'll see in the Donna Maria or my Les Bon Temps Roulé, gives the Lion's Tail a vague tropical vibe. Similarly, Angostura bitters originated in Venezuela and has called Trinidad & Tobago home for more than a century.

A Lion's Tail -- it's hakuna matata for your liver and spirit.

A Spiritual Playboy Cocktail -- The Cloister

A cloister is an architectural feature in monasteries, convents, and other religious institutions.  The Cloister is a drink that comes from an unquestionably non-religious institution: the Playboy Bartender's Guide. Published in 1971, the book and the Cloister are my age. In 2011 Jim Meehan, who created the Brown Bomber and the Newark, mentioned the drink in his PDT Cocktail Book. Combine in a shaker with ice, shake with the resonant rhythm of a Gregorian chant (which I like), and strain into a chilled glass.  Grapefruit peel garnish optional.

Considering the word cloister, either used as a noun or verb, frequently comes up in connection with monks, it's no surprise the Cloister contains Chartreuse. As we see in cocktails such as the Last Word, gin and green Chartreuse go well together, but for the Cloister you want to go yellow. The Phil Collins also combines gin and yellow Chartreuse, which is a key part of non-gin drinks such as the Diamondback. Along with the super simple syrup, the yellow Chartreuse keeps the Cloister from being overwhelmingly tart.

Have a Cloister, and you may have a, dare I say, religious experience.