Attending the Tales of the Cocktail conference inspired me and Ms. Cocktail Den to launch this blog in 2014. Since then, we've attended numerous Tales conferences in New Orleans, as well as Tales on Tour in Edinburgh and San Juan. We've met fascinating people, learned a lot, and had great experiences such as when we mixed beats and drinks that led to the creation of the Les Bon Temps Roule.

This year was different. The COVID-19 pandemic made it impossible to have Tales in person.  So what did Tales do in this extraordinary and challenging time in history? It went 100% virtual for the first time. Adapting to a dynamic situation, this Tales involved another first -- it was 100% free. This made Tales available to anyone with a computer or smartphone and a decent Internet connection.

Catalyst was the theme of this year's Tales. Everyone is a catalyst in their own way, and human catalysts affect everyone. Maybe you listen to a presentation or read a post on a website that leads you to try a new drink. You get the idea. Compared to years past, this year's Tales programming had an increased focus on the people in the cocktail industry. This is a good thing. As with many other industries around the world, the pandemic has had a devastating effect on people's livelihoods. People are resilient, but no one truly knows how how the landscape of the cocktail industry will look once the pandemic subsides. 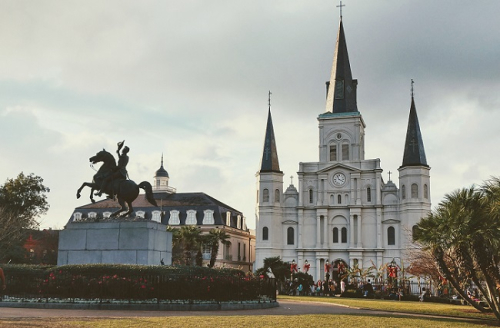 I couldn't see the iconic Jackson Square in New Orleans this year, so I'll wait until the next Tales.

The sessions I attended generally fell into one of three categories -- spirits (e.g. Amaro 101, Low ABV Cocktails), history (e.g. The Man Behind James Bond, The Rat Pack), and topics that transcend  the cocktail community (e.g. You Sell Cocktails Now Sell Yourself, Storytelling Behind The Bar). As with sessions at live Tales conferences, I learned all sorts of interesting things. For example, did you know Ian Fleming was a big fan of bourbon? I didn't, and I'm a James Bond geek.

So what were the pros and cons of the first virtual Tales? The big pro for me was the flexibility. You could absorb the presenters' content as it occurred or later. This convenience meant you didn't have to run (occasionally literally) from event to event. Sometimes a live Tales or Tales on Tour gives you a sense of underlying FOMO. As in, "I want to hear ____ talk about ____ but it's the same time as the session on ______." That wasn't an issue this year because you had the convenience of seeing and hearing everything and everyone you wanted. All of the sessions were on demand (https://www.youtube.com/playlist?list=PL60KktNa23J0tn7NAf3-NSLigFRYjJy9W). A silver lining pro that's actually the result of a con? I didn't gain weight from eating really good local food.

The con of the virtual Tales has nothing to do with the people involved in the conference or the sessions. It was the inability to have the spontaneous and serendipitous in person encounters that make Tales truly memorable. For example, Ms. Cocktail Den and I always will remember meeting Vodka Girl ATX, who we had been following online, in a small conference room at the Hotel Monteleone, or bonding in Edinburgh with a diverse group who became the self-anointed Inebriants. I miss having opportunities to connect like that. Meeting people virtually is fine, but it's a poor substitute for meeting in person. Thanks a lot, COVID-19. Of course, the virus also prevented me from being in the unique city of New Orleans.

There was one aspect of the virtual Tales that, depending on your perspective, was a pro or a con. To what do I refer? No mandatory controlled day drinking. During the days of Tales or a Tales on Tour you're always trying new spirits and cocktails. I'm not saying I abstained from booze during this year's Tales. I'm simply saying I drank far less than I did at any other Tales or Tales on Tour.

As for Tales, here's my wish -- next year in New Orleans!