Who is 24601? It is the prisoner number of Jean Valjean, the protagonist of Les Misérables. Originally penned by the French novelist Victor Hugo, Les Misérables became a popular musical with a very good movie adaptation starring the talented Hugh Jackman as Valjean. This original cocktail creation pays tribute to the character who embodies timeless virtues of honor, strength, and redemption. 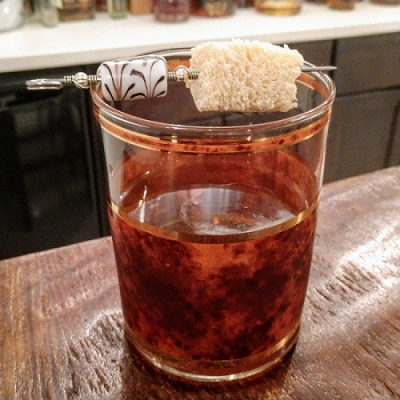 Combine in a mixing glass with ice, stir as if you might only have one day more (if you've seen Les Mis, you know what I'm talking about), and strain into a chilled glass.  Bread garnish (see below) optional.

Just as 24601 has five digits, this drink has five ingredients. Even though most brandy is torched Dutch grapes, if you can use cognac in the 24601 because it is French. Like cognac, Chartreuse is undeniably French. I prefer using green, as you would in a Last Word, instead of yellow, as you would in a Diamondback, because it's not as sweet and has more of a kick. I like Cointreau instead of other triple secs (a generic term for orange liqueurs) because of its taste, and it is French. Speaking of France, you'll see the 24601 shares some cocktail DNA with the Champs Élysées. That's intentional. If you like French themed cocktails, I encourage you to try classics such as the Sidecar and the Kir, or less well known but tasty drinks such as the Burnt Fuselage and the Flower of Normandy.

So why bread garnish for the 24601? Because Jean Valjean's crime was stealing a loaf of bread to feed a starving child. There's definitely no crime in having a 24601, which Ms. Cocktail Den describes as "dangerously drinkable."  Vive le 24601!