I tawt I taw a deewishus dwink! I grew up with Warner Brothers cartoons such as Tweety Bird's adventures with Sylvester. The Bluebird has nothing to do with cartoons, which I indirectly featured in the Matador and the Racketeer. According to Simon Difford of Difford's Guide, the Bluebird may have originated in the late 1950s in the Montmartre section of Paris, the birthplace of the Bee's Knees and the inspiration for the Champs Élysées. 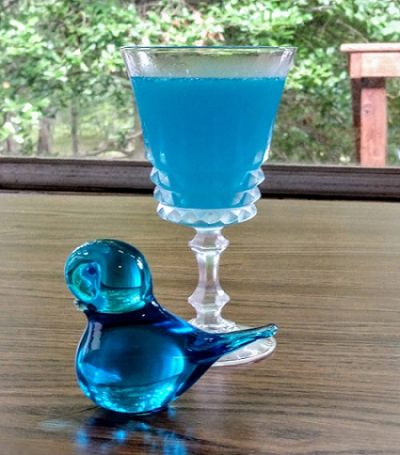 Don't let the bright color fool you. The Bluebird is stronger than it looks (like many pink drinks). Despite a similar name, it has no crossover with the Jungle Bird. In terms of color and taste, the Bluebird is quite similar to the Frank Sinatra. Both have a clear base spirit, blue curaçao, lemon juice, and a sweetener.  The Bluebird's use of orgeat syrup, which you find in the well known Mai Tai and the not as well known Attorney Client Privilege, is unusual but it works. Other versions of the Bluebird have no syrup and lemon juice, but add triple sec. However, curaçao is a type of triple sec, so if you add a second triple sec there's a risk of going overboard with the orange flavor. I prefer a more balanced Bluebird that's still tart and refreshing.

The Bluebird is a good warm weather drink.  Of course, there's no reason you can't have it year round. Anyone who says otherwise is just a bad old puddy tat.