An Alluring Drink -- The Gintriguing

"Intrigue" is a great and versatile word in the English language. Gin is a great and versatile spirit commonly associated with England (although its predecessor is Dutch). What happens when you combine them?  The Gintriguing is an original creation that was the the basis for the Ginvention cocktail featured at the Golden Jubilee party with Government Executive Media Group, a corporate client. 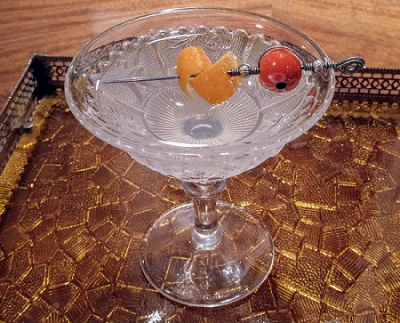 Combine in a mixing glass with ice, stir with a sense of curious fascination, and strain into a glass, preferably a coupe or martini.  Orange peel garnish optional.

The Gintriguing is a variation on a traditional Martini. It is enhanced twice with orange, first with Cointreau (my favorite triple sec used in other drinks such as the Cancer Killer #1 and the White Lady) and second with the orange bitters. I recommend using Cointreau instead of other triple secs (a generic term for orange liqueurs) because it has a clear color and a crisp orange taste. Even though my client liked the Gintriguing, the people there asked for a something a little lighter, so I removed the bitters and added a splash of seltzer water.

Are you intrigued?  Then have a Gintriguing!