A Drink For Two Presidents -- The Roosevelt

Theodore Roosevelt and his distant cousin Franklin Delano Roosevelt are the two of the more famous Presidents in American history.  Teddy, the 26th President, claimed he wasn't a big drinker (although he was partial to a Mint Julep), and FDR, the 32nd President, definitely was a big drinker who mixed cocktails for his White House guests (and Repeal Day occurred while he was in office).  Chris Kelley at Morris American Bar in Washington created the Roosevelt, and this is my adaptation. 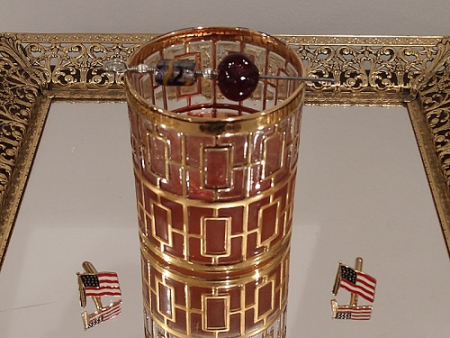 Combine in a mixing glass with ice, stir with the resolve of the subject of Teddy's "The Man In The Arena" speech and the warmth of FDR during one of his Fireside Chats, and strain into a chilled glass.  Amarena cherry garnish optional.

Kelley didn't specify which type of vermouth or bitters to use. I used aromatic bitters because they're versatile. The vermouth is the interesting variable.  It really depends if you want the Roosevelt more dry or sweet. Using dry vermouth in a rye based drink is reminiscent of a Scofflaw, and using sweet vermouth is reminiscent of a Manhattan.  If you like the combination of rye and apple brandy, you'll probably also like the Diamondback and the American Apple. You'll find Benedictine DOM, a rich French liqueur, in cocktails such as the Whiskey Queen.  Clearly this Roosevelt has no relation to the rum based drink with the same name. For a similarly themed rum based cocktail, have an El Presidente.

Be Presidential, raise a glass, and toast Teddy and FDR!