M Is For Mixing -- The Martinez

Do you think M is for Manhattan or Martini? Bridging these iconic cocktails, the Martinez is a delicious and largely unheralded drink.  Was it created in Martinez, California? Did a bartender named Martinez create it?  Was it created for someone named Martinez (just like how the Negroni is named for the customer who requested a new drink, not the bartender who made it)? No one knows. 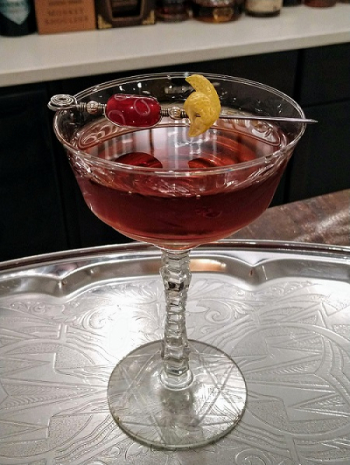 Combine in a mixing glass with ice, stir with a sense of history, and strain into a chilled glass (preferably a coupe).  Lemon peel garnish optional.

The Martinez incorporates sweet vermouth like a Manhattan and gin like a Martini. Old Tom style gin is slightly sweeter than the far more prevalent London Dry style, and it is vaguely reminiscent of whiskey. You can see how the Martinez naturally evolved into the Martinis people all over the world know and love.

Despite the Martinez's conflicting origin stories, cocktail historians agree its first known reference was in 1884 in O.H. Byron's book the Modern Bartender's Guide. Byron's version calls for curaçao, a type of triple sec (orange liqueur used in drinks such as the White Lady) instead of maraschino liqueur (used in drinks such as the Last Word).  In comparison, an 1887 book from legendary bartender Jerry Thomas calls for maraschino liqueur, but his version uses more sweet vermouth than Old Tom gin. I prefer using equal proportions of Old Tom and sweet vermouth in order to emphasize the gin. The Martinez lends itself to tinkering. For example, you can use orange bitters instead of Angostura bitters, use equal parts sweet and dry vermouth (you are using fresh vermouth, right?), or even use London Dry style gin instead of Old Tom.

M -- it's not just the moniker of James Bond's boss (played over the years by Bernard Lee, Judi Dench, and Ralph Fiennes).  It's also the first letter of this important yet mostly unknown cocktail.  Have a Martinez and make it known!

A Unique and Lovely Drink -- The Venetian Kiss 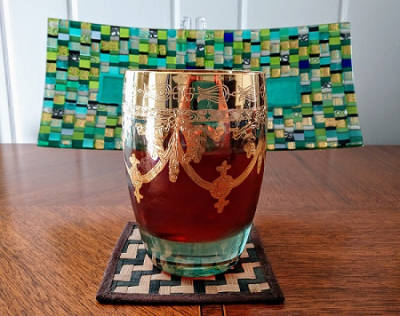 Taste the glory of Venice in this cocktail.

Venice is a unique city. Nicknamed "La Serenissima" ("the most serene" in Italian), there are many reasons it is on many people's travel bucket lists. Having returned from a recent trip where Ms. Cocktail Den and I got caught in historic acqua alta (high water) and flooding, Venice is the inspiration for this original creation for the new year.

Combine in a mixing glass with ice, stir with the serenity of watching life go by on the Grand Canal, and strain into a chilled glass. 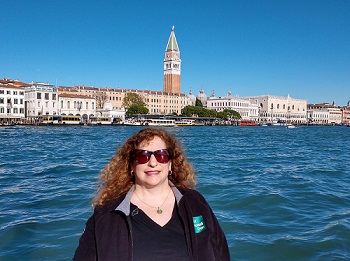 Ms. Cocktail Den in Venice. The photo is real, and there's no filter.

Aperol and Campari are Italian amari (bitter liqueurs), and bottles of them are in bars everywhere in Venice. Campari, an indispensable part of cocktails such as the classic Negroni and my original Cancer Killer #1, has a stronger taste and is more bitter than Aperol, featured in drinks such as the Naked and Famous. That's why the Venetian Kiss has more Aperol than Campari. So why does it have vodka?  There's nothing inherently Italian or Venetian about vodka.  I included vodka because the Russian word literally means "little water," and it is a tribute to the water that surrounds Venice and frequently floods the city.  In addition, it brings balance and subtle potency to the Venetian Kiss.

The 3:2:1 ratio of the ingredients gives the Venetian Kiss elegance in its simplicity. Its name may remind of you of the Almost Red Lips Rye, and its color may remind you of pink drinks such as the Cosmopolitan and my original Italian Sunrise. Have a Venetian Kiss, and savor liquid serenissima!