How is a brown derby glamorous? The hat may not be, but the patrons at the original Brown Derby restaurant in Los Angeles were.  Hollywood celebrities in the 1920s and 1930s such as Mary Pickford made the restaurant a see and be seen sort of place.  Interestingly, the restaurant did not create the Brown Derby cocktail. An unknown bartender at the nearby Vendôme Club invented it in the 1930s. 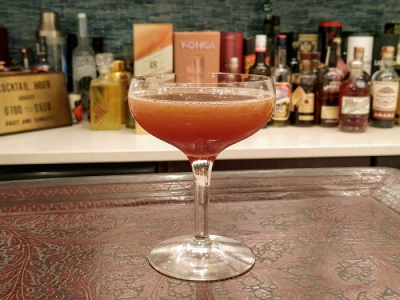 Combine with ice in a shaker, shake with old fashioned Hollywood swagger, and strain into a chilled glass.  Grapefruit peel twist optional.

Although its name might make you think the Brown Derby is related to the Derby, another bourbon based cocktail, to me it actually bears more of a resemblance to the Blinker. Both drinks mix whiskey, fresh grapefruit juice, and a sweetener. Speaking of sweeteners, other recipes usually call for less honey syrup, but those recipes use richer syrups (2:1 or 3:1 honey to water) than the honey syrup I like (1:1). If you would to put a twist on the Brown Derby, use maple syrup instead of honey syrup. Of course, if you want to make the Brown Derby more tart, add a little more grapefruit juice or cut back on the honey syrup. If you don't like grapefruit but like the idea of mixing whiskey, honey, and citrus, try A Thief In The Night.

If the cocktail world had the Oscars, the Brown Derby would be a nominee. Become a cocktail celebrity and have one.

Posted at 10:23 AM in Bars and Restaurants, Bourbon, Film, Movies, Whisky/Whiskey | Permalink | Comments (0)