Who's That Foxy Lady -- The White Lady

To paraphrase Jimi Hendrix and the Isley Brothers, the White Lady is a foxy and sexy lady of a drink. Most sources point to one of two legendary bartenders named Harry (McElhone and Craddock) creating it in the 1920s. McElhone created a White Lady in 1919, but it didn't contain gin (his later one did). There are many variations of the White Lady, most of which I classify as either Svelte or Voluptuous (see below). I prefer Voluptuous. 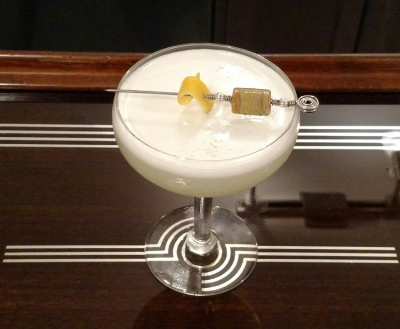 So what's the difference between a Svelte White Lady and a Voluptuous White Lady?  The Svelte only has gin, triple sec, and lemon juice (this makes it a Sidecar with gin instead of brandy), and the Voluptuous has all of those ingredients plus the super simple syrup and egg white. There's certainly nothing wrong with a Svelte, but you'll get a richer and slightly sweeter taste with the Voluptuous. And the Voluptuous is unmistakably white.

While we're talking about colors, triple sec is the general term for an orange liqueur. On the topic of colors and flavors, a Pink Lady is basically a White Lady with glorious grenadine instead of super simple syrup, and sometimes some applejack. Don't let colors fool you.  Just like pink drinks, the White Lady is smooth but powerful.  The name of this cocktail reminds me of one of many hilariously offensive lines uttered in the great Mel Brooks comedy film Blazing Saddles (hint --  the line from Sheriff Bart begins with "where" and ends with "at").

Do you want to honor a lady or ladies in your life?  Then you know what to drink.