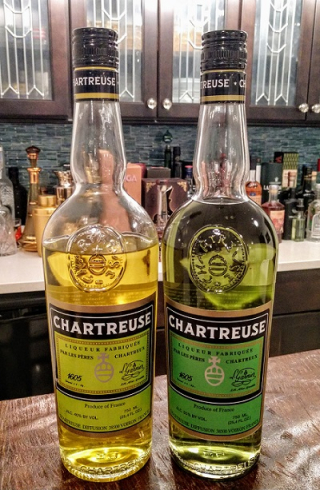 There are two types of Chartreuse -- yellow and green. Liqueurs have a higher sugar content, but that doesn't mean they're weak. Au contraire, as the French would say.  Yellow Chartreuse is 40% alcohol by volume (80 proof), which puts in on par with unflavored vodkas and lower end (in terms of strength, not quality) whiskies.  Green Chartreuse clocks in at a whopping 55% alcohol by volume (110 proof), which is stronger than all but a handful of whiskies.

So why is May 16 Chartreuse Day?  In 1605 a high ranking French military officer gave the Carthusians a manuscript containing a recipe for an elixir that became Chartreuse.  In the United States the shorthand for May 16 is 05/16, but in France, and much of the rest of the world, it is 16/05.

Yellow Chartreuse is slightly sweeter, and some say it has a bit of a honey flavor. Green Chartreuse has a more pronounced herbal taste to me. The colors are natural. Chartreuse's recipe is secret like any other herbal liqueur or amaro, as well as non-alcoholic libations such as Coca-Cola. Legend has it Chartreuse consists of a blend of 130 different ingredients, and at any one time only two monks know the entire recipe. So when should you use yellow Chartreuse or green Chartreuse?  It depends on your mood, what you're making, and even the background music (perhaps Chartreuse by ZZ Top?).  Or you could follow the advice I got from a guy working the door at an event at the great Jack Rose bar in Washington, D.C. -- yellow by day, green at night.

Just as Chartreuse doesn't pull any punches on your liver, I'm not going to pull a punch about its price.  It is expensive, at least in the United States. That being said, it is worth every penny, pound, euro, or whatever currency you use. A little bit of Chartreuse goes a long way. These French monks aren't wrong.