"La Isla del Encanto" (Spanish for "the island of enchantment") is a nickname for Puerto Rico. Earlier this year Ms. Cocktail Den and I had the opportunity to spend time in San Juan, the capital of this American island. I mention this because many people are not aware that Puerto Rico is part of the United States and its people are American citizens. I suspect this lack of awareness is because Puerto Rico is not a state and the vast majority of its people speak Spanish as their primary language.

So why were we in San Juan?  Three words -- Tales on Tour. This is the international and smaller scale version of the Tales of the Cocktail conference that takes place in New Orleans every summer.  In 2018 Ms. Cocktail Den and I attended Tales on Tour in Edinburgh.  We had many wonderful experiences there, so when we learned this year's Tales on Tour would be in San Juan, we jumped at the chance to attend.

I know what you might be thinking ... if Tales on Tour is an international conference, why was it in a different part of the the United States? There is a certain kinship between the cities of New Orleans and San Juan.  It is a kinship borne of tragic circumstance. Hurricanes smashed both of them (Katrina in 2005, Maria in 2017) and forced them to rebuild and rejuvenate. There definitely was an emotional connection between the organizers of Tales on Tour, the attendees, and the citizens of San Juan.  You could see it in eyes and hear it in voices. For me and Ms. Cocktail Den, although neither hurricane affected us personally, that connection made this Tales on Tour even more rewarding.

Tales on Tour isn't just about drinking and bars, although there's certainly plenty of both (I will talk about San Juan bars in Tales of La Isla Del Encanto, Part Two).  First and foremost it is about the people.  This Tales was no exception.  Ms. Cocktail Den and I got to see old friends and make new ones. This Tales on Tour gave us many wonderful experiences involving other people.  I will share a few examples. 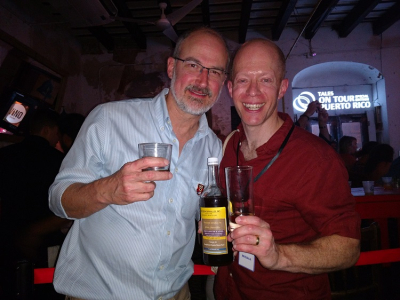 One nice aspect of Tales on Tour is that because fewer people are there, you're more likely to have meaningful interactions with people in the cocktail community. For example, one morning after the welcome toast I introduced myself to Roberto Serrallés, a scion of the family behind Don Q rum. I told him how a Puerto Rican co-worker of mine enthusiastically recommended Don Q rum to me (ironically, she doesn't drink).  Later in the conference, Serrallés was part of a panel on a really interesting presentation at the lovely Hotel El Convento about the past, present, and future of rum. That night Ms. Cocktail Den and I ran into him at an event. Amidst a tightly packed crowd dancing to upbeat music that pulsed through their collective veins, we thanked him for his presentation and told him how much we enjoyed one rum in the Don Q portfolio that isn't yet in our local market. Serrallés could have brushed us off. He didn't.  His eyes lit up as he told us to wait two minutes and find some glasses. After disappearing into a sea of tipsy humanity, two minutes minutes later he reappeared, a bottle in hand.  His toast -- "life is about creating beautiful moments." While the moment may have been fleeting for Serrallés, it was a beautiful moment, one Ms. Cocktail Den and I will remember.

A new feature at this year's Tales on Tour was the Day of Service.  Optional for attendees and mandatory for media such as me and Ms. Cocktail Den, the idea behind the Day of Service was to get people out of the relative confines of the conference and into the larger community. It was an excellent idea. Projects included cleaning beaches, planting gardens, or rebuilding houses. Even though my idea of a power tool is a blender (I must give my father-in-law credit for that hilarious and accurate line), Ms. Cocktail Den and I ended up helping rebuild a house in Loiza. In addition to a couple of Puerto Ricans, our crew consisted of people from Pittsburgh, Miami, and the two of us from Northern Virginia. Instead of bonding over booze (pun intended for you whisk(e)y lovers), we bonded over building. And don't worry, I got nowhere near the nail gun or table saw. 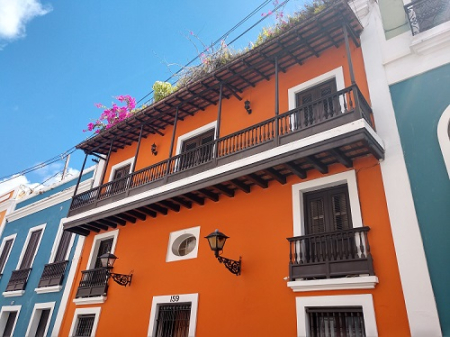 When you're in Puerto Rico, rum is ubiquitous. Bacardi is the most famous. A behind the scenes trip to Casa Bacardi gave us a chance to hang out more with Russ, Sarah, and Sam. We first met them at a great dive bar across the street from the Hotel El Convento, and given the relatively small size of the conference we kept running into them.  We had mutual friends, people we  met at Tales on Tour in Edinburgh (Michele) and Tales last year in New Orleans (Nicole). It wasn't until our trip to Casa Bacardi where we got to learn how and why they became part of the cocktail community. I'm always curious about people's back stories. The three of them indulged me as we explored things such as the lab, the fermentation tanks, and the aging warehouse. And Russ, who makes his own rum, was particularly excited when he got to speak with some Bacardi master blenders as we all blended our own rums during a brief class. I was just pleased the rum we created along with a Pittsburgh bartender was reasonably drinkable.

Of course, we also got to meet other Puerto Ricans.  After the conference we stayed in San Juan for a couple of days to get some beach time, turn a darker shade of pale, detox (sort of), etc. One night we were having a quiet drink or two at one of the bars that made up the award winning La Factoria. We began chatting with Celso, our bartender. As usual, I inquired about his back story. We learned he really was a local guy, as he grew up in a neighborhood mere blocks from where I was sitting. He shared with us his personal post-Hurricane Maria story that led him to La Factoria. Through Celso we learned about the building's history and some Puerto Rican and Latin American drinking habits while we sampled some great drinks, at least one of which I will feature in a future post.

Although the conference was centered in Old San Juan (I really enjoyed the neighborhood, particularly when it was not overrun with cruise ship day trippers), there were events all over the city, as well as some in other parts of the island. This forced you to go to neighborhoods slightly off the beaten path that I might not have seen on my own. For example, the La Placita area on a Sunday night was rocking, and the vibrant atmosphere definitely could give the French Quarter in New Orleans a run for its money. From the perspective of a mainland American (at least this one) San Juan is similar enough that you know you're not in a foreign country, but it's definitely different so you know you're not in a standard, cookie cutter city that could be many places on the mainland.

Want to see the drinks, colors, and sights from our time in San Juan? Click on the links below.

Was our time in San Juan enchanting? Si. After a week there, I can tell you the people and cocktail scene there embody the slogan Puerto Rico se levanta (Puerto Rico rises).

A Cocktail Offer You Can't Refuse -- The Godfather

The Godfather is a cinematic masterpiece and my favorite movie.  Based on a popular novel, the movie has so many resonant scenes, so many classic lines, and so many indelible visual images that describing it here would not do it justice. Marlon Brando, who played the titular character (real name Vito Corleone, born Vito Andolini) reputedly created the Godfather during filming.  The Reina family behind Disaronno amaretto backs this claim.  For those of you who might question the origin story, are you really going to challenge Don Corleone? I didn't think so. 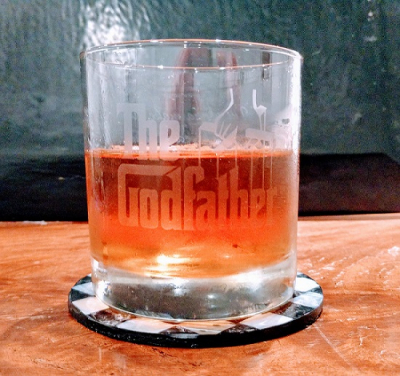 Combine in a mixing glass or shaker with ice, stir with some Corleone family style confidence (excluding Fredo of course), and strain into a chilled glass.

Like the first and second movies in the franchise (relatively speaking to its predecessors, I think the third movie sleeps with the fishes), the Godfather is an elegantly powerful drink. The Scotch cuts the inherent sweetness of the amaretto.  Using a blended Scotch in the Godfather is better because any nuance in a single malt would get lost in the amaretto. Some people think the Godfather may have paved the way for the Amaretto Sour.  If you're not a big fan of Scotch, try a Godmother, which combines vodka and amaretto.  If you want to try other Godfather inspired drinks, go for a Lupara or a Sicilian Manhattan the way Michael went after the heads of the other families.

Is the Godfather not personal but strictly business? When it comes to your cocktail enjoyment, why not both? Make your taste buds and liver an offer they can't refuse.

A Shamrock Drink -- The Luck Of The Irish

The expression "luck of the Irish" didn't originate in Ireland, but in the United States.  Its origin is based on Irish miners who struck it rich in the 19th century. The Luck of the Irish will make your taste buds and liver feel quite lucky. Thanks to John O'Connell of West Cork Distillers and Liquor.com for introducing me to this smooth and powerful cocktail. 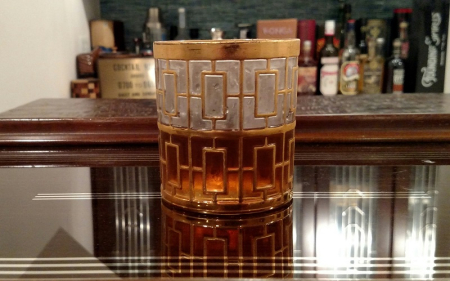 Combine in a shaker or mixing glass with ice, stir with the satisfaction of having good fortune smile on you, and strain into a chilled glass (the original has you pour the drink over a large ice cube).

A true Luck of the Irish must include Irish whiskey. The Liquor.com version specifically calls for West Cork Distillers 10 year old single malt. That is a very good whiskey (I have a bottle), but similar Irish whiskies will work well. If you like Irish themed drinks, you might try the Good Cork, the Intense Irish, and Irish Coffee. While I'm not of Irish descent, I did travel to Ireland once and had a great time. And of course I like a good cocktail.

Liquor.com describes the Luck of the Irish as a variation on a Manhattan. In one respect that's correct because the drink contains whiskey and sweet vermouth.  You could say the same thing about other drinks like the Derby. It's also similar to a Bijou (which is basically a Luck of the Irish with gin), Negroni, Boulevardier, or Corpse Reviver #1 in that the drink contains equal proportions of three spirits. However, I think the characterization is inaccurate because the Luck of the Irish is significantly stronger than a Manhattan. One uses a couple dashes of bitters, and the other uses a full ounce of green Chartreuse.  Big difference. Green Chartreuse, a key ingredient in the Last Word and variations such as the Final Rye, is 110 proof (55% alcohol by volume).

Even though Daft Punk and Pharrell Williams aren't Irish (they're French, he's American), I'm sure they would encourage you to Get Lucky -- and have a Luck of the Irish.