James Bond's adventures take him around the world. In Skyfall he travels to China, and in Tomorrow Never Dies he works with a Chinese agent played by Michelle Yeoh, a great actress who's been in phenomenal films such as Crouching Tiger, Hidden Dragon. Cheongsam is an American company that hand makes unique tea liqueurs in China from locally sourced tea. The Jade Vesper, an original creation of mine, uses its Jade Oolong liqueur in a variation on the Vesper, an original creation from James Bond (seriously). 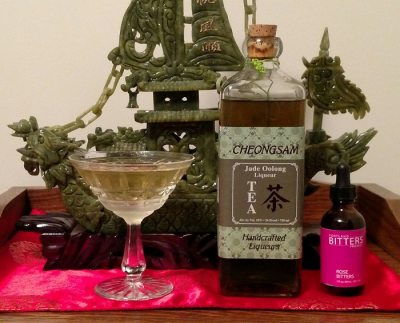 Combine in a shaker with ice, shake with the power and grace of Michelle Yeoh fighting (watch Crouching Tiger, Hidden Dragon), and strain into a chilled glass.

The Jade Vesper substitutes Jade Oolong for the Kina Lillet (now Lillet Blanc) or dry vermouth in a Vesper. The Jade Oolong liqueur injects a subtle sweetness into the drink. The result is a cocktail that's pleasantly strong without becoming a blunt instrument of drunkenness. Technically you should stir the Jade Vesper because it doesn't contain citrus or egg whites. Shaking it pays tribute to how 007 ordered the Vesper, and how he likes his vodka martinis. Rose bitters (I used some from Portland Bitters Project) aren't common, but like many things in today's world you can find them online.

Want to channel James Bond or your favorite Bond girl? The Jade Vesper is a great way to do it.