Red lips can signify temptation, power, or seduction.  Scott Harris, a founder of Catoctin Creek distillery in my home state of Virginia, based the Almost Red Lips Rye on a drink in the cocktail book at the legendary American Bar. The bar is located in the high class Savoy Hotel in London. Even though Ms. Cocktail Den and I are not high class, we had drinks there when we heard London Calling. The people at the bar (the birthplace of the Hanky Panky) make great drinks, and Harris, whose distillery produces top notch spirits, made a great one here. 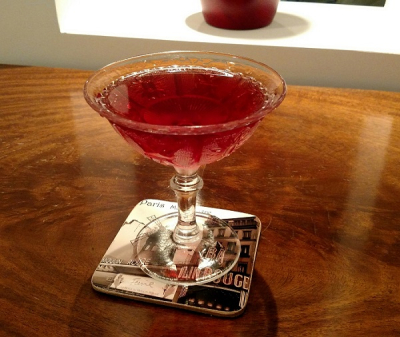 Combine in a shaker with ice, stir with a sultry air, and strain into a chilled glass.

The Almost Red Lips Rye has a lot of ingredients, so you can manipulate them to suit your tastes and whatever is in your bar.  There are three variables that have an outsize impact on the cocktail.  Port, the first one, is the one about which I know the least. It's basically a fortified red wine that's sort of sweet and comes in either a ruby or tawny style. There are many books and blogs about port, so you may want to check them out for more information.

The second variable is the fruit liqueur.  It boils down to this -- do you prefer blueberry (mirtillocello), raspberry (Chambord), or cherry (Heering)?  Keep in mind there's a wide range in proofs of these three different liqueurs. The third big variable is the amari -- Aperol or Campari.  The difference isn't in the proofs, but the taste. Aperol, which you use in drinks such as the Naked and Famous and the Ides of March, has a lighter orange taste than Campari, which you use in drinks such as the Cancer Killer #1 and the Scandinavian Suntan. You're not going to wrong with any combination of the Almost Red Lips Rye, but one using a ruby port, Chambord, and Aperol is going to taste a lot different than one using a tawny port, Cherry Heering, and Campari.

Is the Almost Red Lips Rye more complex than most drinks in the Den?  Yes.  Is the extra effort worth it?  Yes.  Are you tempted?