"Laissez les bon temps roulé" is French for "let the good times roll," and it's an unofficial slogan of the city of New Orleans. Ms. Cocktail Den and I first created the Les Bon Temps Roulé when we mixed beats and drinks at a D'Ussé cognac event during the Tales of the Cocktail conference.  The concoction was okay (especially considering we only had five minutes to create and execute an original cocktail), but not great. After I experimented at home, here is the new and improved version. 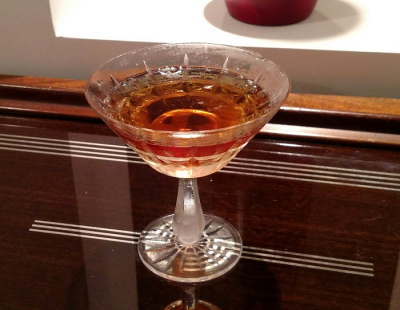 Combine in a mixing glass or shaker with ice, stir with some enlightened passion, and strain into a chilled glass.  Orange peel garnish optional.

Like the rapper Pitbull's description of himself, I like to think the Les Bon Temps Roulé is sexy and sophisticated. The cognac or brandy you use is important.  After all, it is the primary ingredient.  While I certainly thank D'Ussé for inspiring me to create the Les Bon Temps Roulé, and it works well in the drink, use your preferred cognac or brandy.  They're all torched Dutch grapes. Just remember all cognac is brandy, but not all brandy is cognac.