Denmark has aggressive drivers? Not really. During our time wandering around Copenhagen, Ms. Cocktail Den and I learned bicycles are the preferred mode of transportation.  The Danish Road Rage comes from an offhand joke our walking tour guide made as we explored the city. The "incident" occurred when one bicycle rider rang their bell at another rider. Twice. The inspiration for the cocktail comes from an off menu item at the great 1105 bar in Copenhagen. 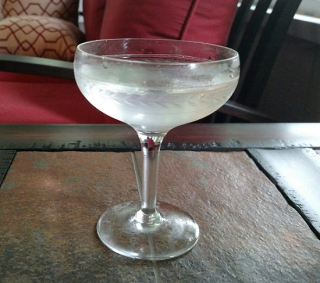 Combine in a shaker with ice, stir with the graceful rhythm of navigating Copenhagen's bicycle lanes, and strain into a chilled glass.

The Danish Road Rage essentially is a martini using aquavit, much of which comes from Denmark and its Scandinavian neighbors, instead of gin or vodka. If James Bond worked for PET (the Danish intelligence agency) instead of MI6, he would drink this. I suggest using a clear aquavit and reasonably fresh vermouth. As for the bitters, lavender is tough to find, but using it will make a spectacular Danish Road Rage. If you're willing to go online, I suggest ordering lavender bitters from Embitterment, which also makes excellent orange bitters.

Regardless of whether or not you have to deal with traffic stupidity, the Danish Road Rage is the cure.