Where there's smoke, there's fire. Or in the case of the East-West Magic, where there's a bit of smoke, there's an exquisite and earthy cocktail. Cheongsam is an American company that hand makes unique tea liqueurs in China from locally sourced tea. Ms. Cocktail Den and I met the people behind Cheongsam at the Tales of the Cocktail conference this year, and after trying the liqueurs we were dying to conduct some experiments with them. The East-West Magic is an original creation incorporating some smoke from Cheongsam's Smokey Mist liqueur (the East) and Scotch (the West). 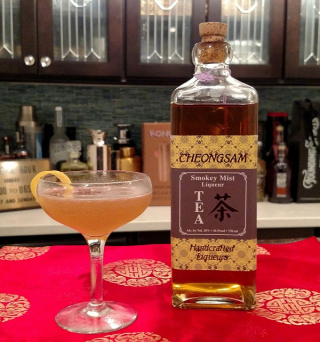 Combine in a shaker with ice, shake with the initial jolt of seeing smoke even when you're expecting it, and strain into a chilled glass.

The East-West Magic has some unusual ingredients that might be hard to find.  Reward yourself and find them. You can get all of them online. While the Smokey Mist liqueur is a critical part of the East-West Magic, don't overlook the Scotch.  Use one with a little smoky undertone, but not too much (I used Highland Park 12). If the Scotch is too smoky or peaty you'll miss the subtle joy of the Cheongsam liqueur. If you like the East-West Magic, you might like the Penicillin (or my tequila and mezcal based spin on it, the Mexicillin), or an even smokier drink such as the Fireside Chat. The cardamom bitters give the East-West Magic some liquid nuance.

As you savor this cocktail, it's ok to channel the popular 1980s tune from the Cars (mentioned in the Blinker) and sing --uh oh, it's East-West Magic.