Pear and ginger might sound like a weird combination.  Sometimes weird is good.  In the case of the Intense Spiced Pear Martini, it's really good. Why is it intense?  Because I used Barrow's Intense ginger liqueur (full disclosure -- Ms. Cocktail Den and I are small investors).  This original creation is an adaptation of a drink on the menu at a McCormick & Schmick's restaurant. 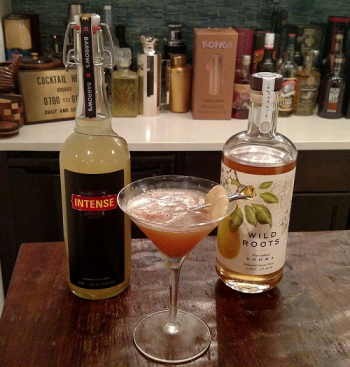 Combine in a shaker with ice, shake with fiery emphasis, and strain into a chilled glass. Candied ginger and/or nutmeg garnish optional.

There aren't many pear vodkas on the market.  If you can get your hands on Wild Roots, do it. We tasted its vodkas at the recent Tales of the Cocktail conference, and the people there generously provided us with some free bottles for cocktail experiments. Grey Goose also makes a good pear vodka, but Wild Roots has a more pronounced pear flavor. I tested two versions, one with Wild Roots and one with Grey Goose.  In our view the one with Wild Roots was the clear winner.

Barrow's Intense is in liquor stores in most states.  If it's not yet in your local store, you can get it online. Without Barrow's Intense, the drink just won't be the same. If you don't have pear vodka on hand, you can use Barrow's Intense to make something similar, such as an Intense Ginger Lime Martini.

This cocktail is spiced but not spicy. I thought the drink upon which it is based was unnecessarily complicated. That one had seven ingredients.  In comparison, the Intense Spiced Pear Martini has five and is far superior. If it's a little too spicy for you, add a little St. Germain elderflower liqueur (used in drinks such as the Flower of Normandy), orgeat syrup, or super simple syrup.

Do you want to be a little wild? A little spicy?  A little intense?  Then answer the call from the Intense Spiced Pear Martini.