A CFIT Cocktail -- The Burnt Fuselage

CFIT is an aviation acronym that stands for "controlled flight into terrain."  It's a benign sounding term for a catastrophic event -- a type of crash.  The Burnt Fuselage is a creation from Chuck Kerwood, a fighter pilot in the Lafayette Escadrille, a squadron mostly composed of American volunteers who flew for France in World War I. Kerwood survived the war, and the Burnt Fuselage lives on thanks to advocates such as cocktail historian and author David Wondrich. 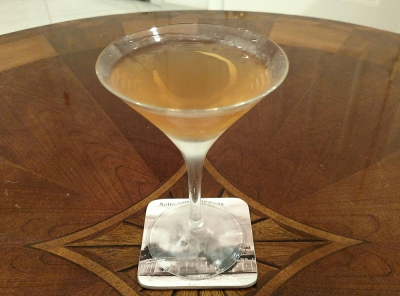 Combine in a shaker with ice, stir with joyous relief of not being part of a burnt fuselage, and strain into a chilled glass.  Lemon peel garnish optional.

Despite its ominous name, the Burnt Fuselage is a well structured and lively drink. Given its history, it's appropriate to use all French spirits. In discussing torched Dutch grapes we learned all cognac is brandy, but all brandy isn't cognac. Definitely use Grand Marnier.  Its distinctive blend of orange liqueur and cognac really works well.  Even though I'm a big fan of Cointreau, a triple sec I use in drinks such as the Margarita and Orange Satchmo, my experiment using it in the Burnt Fuselage sort of went down in flames (pun intended).

If you see fit (get it? if not, say it out loud) to try a Burnt Fuselage, you'll be a cocktail ace.

Who knew being a DJ is like being a bartender? I never thought about it until Ms. Cocktail Den and I attended an event hosted by D'Ussé cognac at Tales of the Cocktail in New Orleans. Whether they're professionals or amateurs (or as I described myself during the event, a professional amateur) DJs and bartenders are artists. One has music as their medium and the other has cocktails. 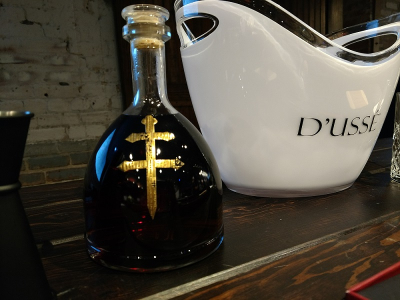 The first part of the event was about the music.  9th Wonder, a big time hip hop record producer and DJ, spoke about DJing and laid down a few beats. I must confess I had not heard of him, but I certainly have heard of many of the artists with whom he's worked, e.g. Beyoncé and Ludacris. Along with Jay Clipp, a nationally known DJ, 9th Wonder showed what goes into spinning records (or audio files on a computer) and creating some great music. It's a lot harder than it looks. The presentation was really interesting, even for someone like me who has very little knowledge of hip hop and no musical talent. Ms. Cocktail Den, who has musical talent, thought the connections are fascinating.

The second part of the event focused on D'Ussé cognac and using it in drinks. Everyone stood at tables, each of which had glasses of D'Ussé and bar tools such as mixing glasses, jiggers, and shakers. First Colin Asare-Appiah, the dynamic D'Ussé brand ambassador, had us taste the cognac.  It's quite good and pretty smooth.  The brand has a music connection, as rapper and producer Jay-Z is a part owner. 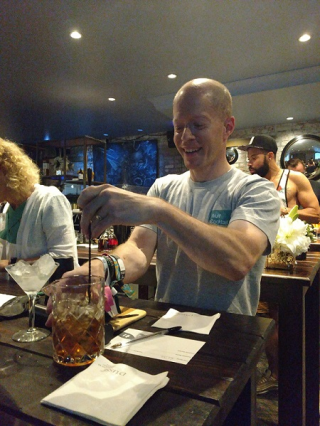 After tasting the cognac, Colin presented everyone with a challenge -- create a cocktail using D'Ussé as the base spirit in five minutes. Everyone had access to other possible ingredients including a small selection of other spirits, syrups, citrus, and bitters.  I admit I got flustered, in large part because most people in the room were highly accomplished professional bartenders. For example, the people standing behind us were from Le Syndicat, a Tales nominee for the best International Cocktail Bar.  Ms. Cocktail Den and I persevered. Our spur of the moment creation, the Les Bon Temps Roulé ("the good times roll" in French, "let the good times roll" is an unofficial slogan in New Orleans), didn't turn out quite as well I would have hoped (recipe is in the photo caption). Nonetheless, merci to D'Ussé for a great experience. We got to learn things, create a cocktail, and meet fun and interesting people such as Kapri Robinson and Josh Davis. I even got an offer to do a guest bartending gig; I'm still not sure if he was serious.

So what some of the parallels between mixing records and mixing drinks?

1.   As Colin astutely noted, the standard four count in music is akin to the four components of a cocktail -- spirit, sugar, water, and bitters. The spirit is the beat. You want it to be consistent and noticeable, but not overwhelming.

2.  Mixing records is like mixing drinks. If you mix records abruptly, the effect is jarring. 9th Wonder and Jay Clipp described it as "shoes in the dryer" or "trainwrecking." An unbalanced drink has the same effect on your taste buds as trainwrecking has on your ears.

3.  What's old is new again. Samples from 1970s records appear in a lot of modern music hits. 9th Wonder used a snippet from a Beyonce song to illustrate this point. Similarly, cocktails from pre-Prohibition and Prohibition eras increasingly appear on modern drink menus. The rediscovery of various spirits and recipes have inspired people to create current spins on older cocktails.

Are you ready to be a DJ of drinks? I know you are. Let the good times roll!

A Bullfighting Drink -- The Matador

Bullfighting is a brutally elegant spectacle of human versus animal. A matador is the man or woman (or rabbit, if you're like me and enjoy the Bugs Bunny cartoon Bully for Bugs) in the ring with the bull.  While there's a rich history of bullfighting on both sides of the Atlantic, particularly in Spain and Mexico, the history of the Matador is murky. The earliest reference to it I could find dates back to 1937. There are many similar versions of the Matador, and this is the one I prefer.

Combine in a shaker with ice, shake as if you're a bull charging the you know who, and strain into a chilled glass. Lime garnish optional.

My preferred Matador isn't far removed from a Margarita. Almost all versions of the Matador include tequila, pineapple juice, and lime juice.  For me adding a triple sec (orange liqueur) enhances the drink. The same goes for using a reposado tequila, although using a blanco tequila certainly is fine. 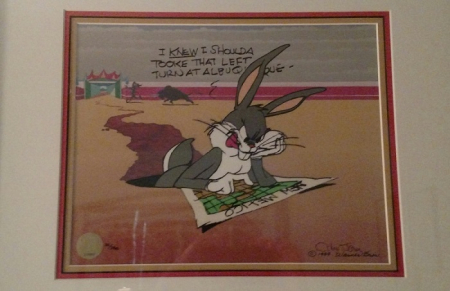 One thing I definitely recommend is using fresh pineapple juice. If the resulting drink is too citrusy tart for you, add half an ounce of super simple syrup. You don't want your taste buds to end up like the matador in the movie Blood and Sand, which led to the drink of the same name.

Let's say you realize too late you shoulda taken that left toin at Albukoikee (it's a great line from the cartoon). Stand in the ring. Take a deep breath. Steady your nerves. Have the confidence of a matador as you drink a Matador. And most importantly -- enjoy!