An Ode To Irish Cocktail Joy -- The Good Cork

Ms. Cocktail Den had a business trip to Cork, a small city in southwest Ireland, and I shamelessly tagged along. I had a wonderful experience playing the Ode to Joy from Beethoven's Ninth Symphony (you know this great tune, just Google it) on the Shandon Bells in St. Anne's Church. The Good Cork, a creation from Phil Ward in New York City, is much younger than the Shandon Bells, and it evokes fond memories of my brief time in Cork. 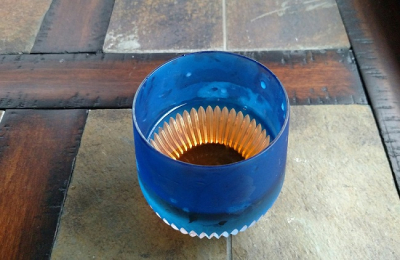 Combine in a shaker with ice, stir with stereotypical Irish liveliness, and strain into a chilled glass.

Irish whiskey and mezcal (tequila's smokier cousin)?  It works. The Renegade has a similar pairing (bourbon and mezcal) of spice and smoke, and like that drink, the Good Cork is spirit forward. The original calls for Redbreast 12, which is a fine whiskey.  I merely suggest using one of the many whiskies from the New Midleton distillery (the subject of Sine Metu), which is near Cork. Benedictine, an herbal liqueur you use in drinks such as the Racketeer and Widow's Kiss, is flexible enough so that it pulls everything together.

Looking for something unusual, tasty, and strong?  The Good Cork joyously delivers. 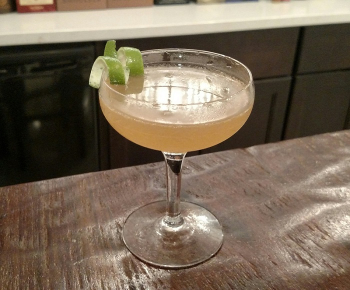 You say you want an evolution? Well, you know. We all want to change the cocktail world. That's not exactly what the Beatles sang in 1968, but a similar sentiment from John, Paul, Ringo, and George could apply to the Tales of the Cocktail 2018 conference Ms. Cocktail Den and I recently attended. After some public turbulence and a change in ownership, there was curiosity in the cocktail community about what would happen. For those who never have been to Tales, for those who've been in the past, and for those who were with us thus year, here's our take on the evolution of Tales. 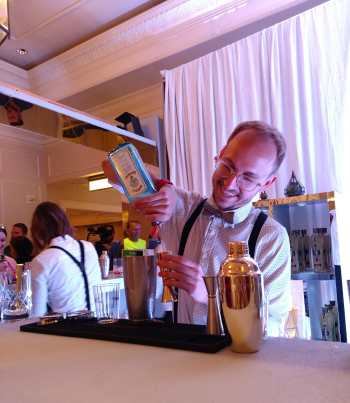 But first, let me give you some personal background. In a way, Ms. Cocktail Den and I went to Tales before Tales. Many, many years ago we participated in a great Southern Comfort sponsored cocktail walking tour of New Orleans (among other places, it stopped at Antoine's, our favorite restaurant in the city and the source of the Antoine's Smile). Tours such as that and like minded industry professionals and cocktail enthusiasts eventually formed the base of Tales of the Cocktail.

New Orleans is a city that's big on tradition, so let's start with traditions that carried over from the old Tales to the revamped Tales.  First and foremost, the friendliness (pardon the alliteration).  One of the many wonders of Tales is we get to see friends we've made at previous Tales in New Orleans, e.g. Josh Morton and Danielle Hengge, friends from Tales on Tour, e.g. Michele Colomb and Erik Puryear, and new friends, e.g. Nicole Torres-Cooke, who we'd been following online for awhile. You never know who you might meet. For example, we went to a Disaronno event featuring Simon Difford, the founder of Difford's Guide. I use this website a lot when researching cocktails, and it's a great resource. We went to introduce ourselves to Simon, and what we figured at most would be a 60 second introduction turned into a fascinating 30 minute private conversation.

This ties into the second carryover from the old Tales -- the knowledge sharing. Simon gave us his insightful input about how we could continue to pursue our cocktail passion. Ms. Cocktail Den and I have learned a lot of from people over the years at Tales, and this year was no exception. Whether it was new spirits, new recipes, or new techniques, there's a lot you can takeaway so you and your cocktails can evolve.

There were two big differences between the old and new Tales, one physical and one psychological. The physical one is there were noticeably fewer people in attendance. That wasn't a surprise, as I suspect a lot of people stayed on the sidelines.  From my perspective the smaller turnout was a good thing. Maybe it's because I generally don't like large crowds, but this year Tales felt less overwhelming and chaotic than in years past.  At previous Tales there seemed to be a collective frenzy based on FOMO (fear of missing out; I'm not hip enough to use the acronym, but I don't care), which led to clusters of people running around the Quarter and the city without stopping to savor the moment. It was sort of a cocktail version of people who jostle to get a photo, and they end up looking without seeing (there is a huge difference between the two).

A perfect example of a non-manic event was the cell phone free Spirited Dinner we attended. Hosted by Jonathan Pogash and Pamela Wiznitzer, the event focused on conversations and connections without the distraction of modern technology. Ms. Cocktail Den and I were pleased to see this Tales did not have episodes of that collective mania. Neither of us cared for what appeared to be a deliberately and overly packed schedule on one or two days, but like everyone else we adjusted and had fun anyway. 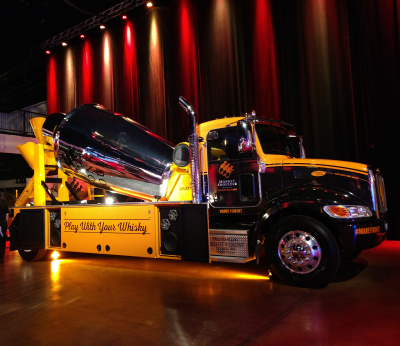 The psychological difference was that this year's conference seemed to have an increased emphasis on topics other than the spirits and drinks themselves. This aligns with what we've seen and heard since the change in ownership and to become a foundation. In fact, the most pronounced example of a non-booze emphasis was the William Grant & Sons party, which was alcohol free.  Yes, you read that correctly.  Personally I enjoyed the venue (Mardi Gras World) more than the actual party (which Ms. Cocktail Den really enjoyed), but I applaud William Grant & Sons for its bold move.  Don't get me wrong, the spirits definitely were still at Tales in full force. We did plenty of sampling and learning.

Our coverage this year focused on the tasting rooms and private events. Of course, there were plenty of seminars at the conference. In addition to traditional seminars focusing on spirits and history, many of this year's seminars focused on being better, whether as an industry professional, home bartender, or cocktail enthusiast. They included useful, practical topics such as the Beyond the Bar program (helping industry professionals take better care of themselves) and the Green Dot program (de-escalating difficult situations). Creating and serving cocktails can be tougher than you think, and if seminars like these help people evolve both personally and professionally, we're all for it.

Want to see more of our Tales of the Cocktail experience? Check out our Facebook page for our photos:

So what's in store for next year?  We'll find out together.  In the mean time, keep on cocktailing!

Pour Some Sugar Cane On Me -- Rum, Rhum Agricole, and Cachaça

The Def Leppard song "Pour Some Sugar On Me" is an iconic rock anthem from the 1980s, and it's one of my favorite tunes from the group. The song has nothing to do with sugar or sugar cane, but three spirits are derived from sugar cane -- rum, rhum agricole, and cachaça.  You've definitely heard of the first one, you probably haven't heard of the second one, and you might have heard of the third one.  If you're familiar with all three, then congrats. 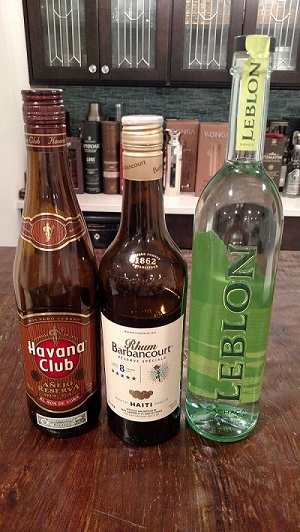 So if all of these spirits come from sugar cane, what are the differences? And why should you care? This short article from Tara Nurin at Vinepair has an excellent summary. Let me distill (pun intended) the technical stuff down to the basics. Rum comes from fermented sugar cane juice or molasses, which is a byproduct of the refining process. Rhum agricole only comes from pressed sugar cane juice that is not fermented. Cachaça is a cross between the two, as it must be fermented (like rum) but only can come from sugar cane juice and not molasses (like rum agricole). Rum can come from anywhere (not just the Caribbean), rhum agricole is associated with French Caribbean territories (agricole means agricultural in French, and that's why it uses the French spelling of rhum), and cachaça is the national spirit of Brazil.

Rum in and of itself is a big category, so I encourage you to explore different brands and ages. When you read descriptions of rhum agricole and cachaça, you'll probably see words like earthier, vegetal, and funkier (George Clinton or Prince would approve -- get it?). Those are pretty accurate.  The bottom line is you can have a lot of fun experimenting with these related spirits in your cocktails.

With apologies to the guys from Def Leppard -- step inside, cocktail this way, you and me (sugar) cane, hey hey! 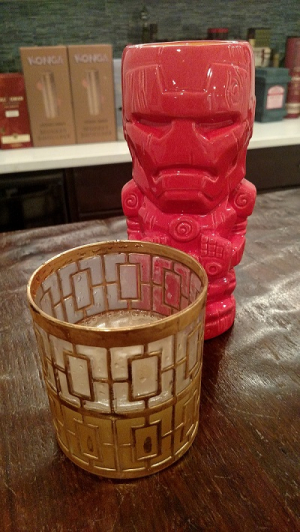