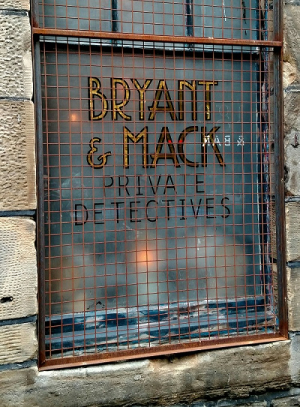 Here's a mystery -- where in Edinburgh can you find a top notch bar that's also fun and unpretentious?  This one is easy to solve.  Simply go to Bryant & Mack Private Detectives.  Ms. Cocktail Den and I did when we attended Tales on Tour earlier this year.

Behind a humble exterior lies a small, dark bar with great drinks and great people. To me the interior evokes the intimate atmosphere of somewhere Humphrey Bogart, who played private detectives in classic films such as The Big Sleep and The Maltese Falcon, might have a drink or two as he contemplated his next move. Neither Bogart nor films like those were the inspiration for the bar's theme.  The inspiration was the deceptively effective television detective Columbo, played by Peter Falk. 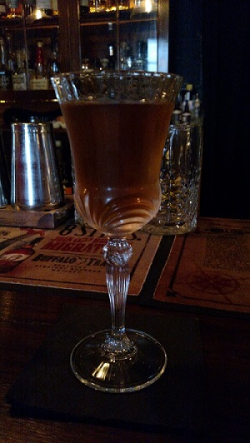 Bryant & Mack Private Detectives is the brainchild of Ross Bryant and Jason Cormack. We happened to have a great conversation with Jason our first time there; we also met Alexandra Barstalker, a kindred cocktail spirit.  We briefly met Ross on a different night during a memorable Tales on Tour event with Buffalo Trace and Fratelli Branca (premium bourbon and vintage Fernet Branca at low prices ... need I say more?). While they are both very proud of what they have accomplished (and they should be), they are very modest.

The drinks are flavorful, creative, and well executed. Ms. Cocktail Den really liked the On Green Acres, and I particularly enjoyed the Perla Nera and the Bijou. Something else I enjoyed is the no standing policy.  If you're not sitting at the bar (something we always prefer) or one of the tables, you're not having a drink. It's a counterintuitively brilliant move.  Even though the policy sacrifices potential revenue for the bar, it enhances the customer's experience because it won't get crowded.  Philip Marlowe and Sam Spade would approve.

So here's a new mystery -- when are you going to Bryant & Mack Private Detectives?