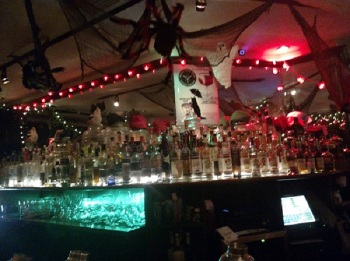 As the name suggests, vodka is the main focus at the Russian Vodka Room. It carries an impressive selection of "little water" (what vodka literally means).  The real showstoppers are the house infused vodkas. The flavors are different than you what might see at other bars.  My personal favorites include the garlic, pepper and dill, apple and pomegranate, and ginger. If you want to put some hair on your chest (metaphorically speaking), have the horseradish.  The food is quite good, too. I can embrace my Russian and Baltic ancestry by pairing vodka with herring (I think this combination is awesome, Ms. Cocktail Den thinks it's disgusting).

Vodka infusions in all their liquid glory.

At any top notch bar the people are just as important, if not more, than what it serves.  The Russian Vodka Room is no exception.  We've always had great service from the bartenders (thank you Bo) and your fellow drinkers are sometimes very interesting.  For example, the last time Ms. Wulf Cocktail Den and I were there we had a great conversation with Dale Badway, a Tony award winning Broadway producer.  Speaking of people, another good thing about the Russian Vodka Room -- some native Russian speakers hang out there.

Whether or not you're like me and have some Russian blood in you (or blood from somewhere that used to be part of the Soviet Union), the Russian Vodka Room is a great place to have a drink or three. You'll be saying na zdrovye (the Russian equivalent of "cheers") in no time.