Tales of Grain and Suggestion

Grain and suggestion are not words you usually see in the same sentence. They were the subjects of an interesting seminar Ms. Cocktail Den and I attended during our fabulous time at the recent Tales on Tour in Edinburgh. The presenters at the seminar, titled "Against The Grain," were Davin de Kergommeaux, an acclaimed Canadian whiskey expert and author, and Kevin Vollebregt, the senior brand ambassador for Libbey, a glassware company. Our conversations with them after the seminar exemplified some of the nice features of Tales of the Cocktail and the global cocktail community in general -- they were very approachable and more than happy to share their knowledge.

This whiskey all tastes the same ... or does it?

Some of the seminar focused on the science of grains and how they become whiskey. Even someone as science-challenged as me was able to follow along and retain some facts. For example, each of the four grains used in whiskies (corn, barley, rye, wheat) have different primary flavors (creamy, nutty, salty, bread), and pulling whiskey off a still at high proof causes it to lose a lot of its flavors. If you want to read more about the whiskey making process, you can go to past posts such as What's In Your Bourbon?, as well as numerous other resources. 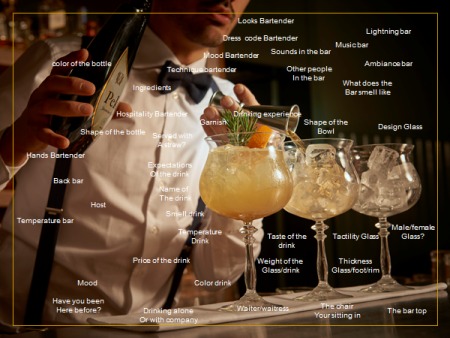 The fascinating part of the seminar pertained to the power of suggestion. Illustrating their point, Davin and Kevin had everyone taste the same whiskies in different glasses. Did they taste the same? No. Your brain activity will be a huge influence on your drinking experiences. You're not just tasting a drink with your mouth and nose.  You're combining all of your senses, your past memories and experiences, and other variables.

I know this stuff sounds basic, but did you ever really stop and think about it?  For example, if you recoil at the mere mention of a classic cocktail such as a Whiskey Sour or a Margarita, ask yourself why.  Was it too strong, too sweet, too sour? Maybe it was.  Or was it the context surrounding the drink, e.g. the glass in which it was served, your mood, etc.?

For me the important takeaway from Davin and Kevin's seminar is simple -- open your mind. Be receptive to new flavors, new experiences, and new influences. Consider reframing and reclaiming your past bad cocktail experiences. Whether it's the proportions of the drink, the glass in which you drink it, or the music that's playing in the background, the resulting experience could be profoundly different and positive. Cheers!