Wulf Cocktail Den
Home Archives About Subscribe
Tales of Grain and Suggestion
Canadian Whisky (the book, not the booze)

A Cocktail Of Valor -- The Don't Give Up The Ship

You're outnumbered, outgunned, and dying.  What do you do?  If you were Captain James Lawrence of the USS Chesapeake, you give one final order -- don't give up the ship. This episode during the War of 1812 became a rallying cry for the United States Navy.  While the history behind the phrase is clear, the history of the drink is not.  It first appeared in a 1941 cocktail guide, then remained dormant until it resurfaced on the Seattle and New York City cocktail scenes more than 60 years later. 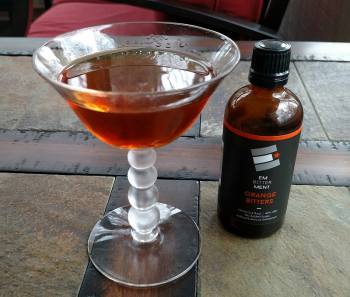 Combine in a shaker with ice, stir with the steely determination of a true leader, and strain into a chilled glass. Orange peel garnish optional.

All of the flavors in the Don't Give Up The Ship, which sort of expands on a Hanky Panky, work really well together. Even though it's all alcohol, it's not overpowering. Use Cointreau (my favorite triple sec) because it has a cleaner orange taste. There are a few versions of the Don't Give Up The Ship, but I like this one for a couple of reasons.  First, the proportions are pretty easy to remember. Second, the result is a well balanced cocktail -- a little sweet, a little sharp, and definitely unforgettable.

If you're going to give up some of your liver cells ... just Don't Give Up The Ship.