Italian And Not Really "Bitter" -- The Amaretto Sour

In celebration of National Amaretto Day, the Amaretto Sour pays homage to this ubiquitous liqueur. The Italian word roughly means "little bitter."  However, amaretto liqueur is quite sweet. Traditionally it's made from bitter almonds, but some versions also incorporate apricot pits. The history behind the Amaretto Sour is unknown.  The standard recipe (amaretto, lemon juice, and simple syrup, or God forbid some sour mix) is too sweet for me, so I prefer this very minor adaptation of an enhanced recipe from the renowned Jeffrey Morgenthaler. 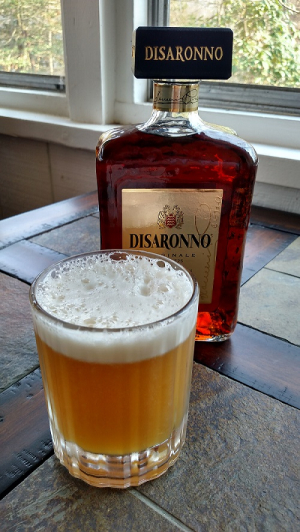 As you might think, this Amaretto Sour is reminiscent of the Whiskey Sour and its variations such as the Midnight Train and the Icelandic Sour.  In some respects it also is reminiscent of the Stiletto. The bourbon keeps the Amaretto Sour from becoming overpoweringly sweet.  The egg white gives the Amaretto Sour a richer flavor and protein boost (Morgenthaler uses 1/2 of an egg white, but for me it's easier to use all of it), which makes the cocktail sort of ... healthy?

Despite it sweet base, this Amaretto Sour isn't all that sweet.  It's not bitter, it's buonissimo!