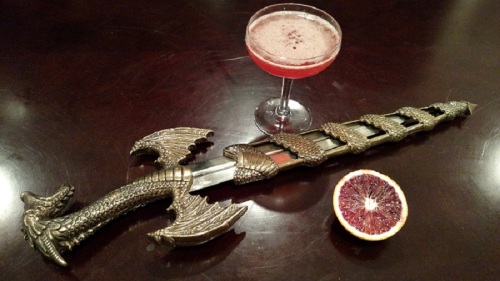 Combine in a shaker with ice, shake with the ferocity of stabbing your mortal enemy, and strain into a chilled glass. Lemon twist garnish optional.

The Ides of March is a nice mix of American (bourbon) and Italian (Aperol). Aperol is a lighter, orange flavored, and easily accessible amaro used in other drinks such as the Part-Time Lover.  The blood orange syrup can be trickier.  There are a number of ways to make it.  I must confess that when I was in the middle of making the syrup, I forgot how Bounds made it, so I improvised.  I used the same method as I use to make glorious grenadine. If you have to use processed blood orange juice for the syrup, see how sweet it is and adjust the proportions as needed.

Unlike Brutus, who betrays Caesar (his recognition of Brutus is what sparks the line "et tu, Brute" ("and you, Brutus?")), the Ides of March will not betray your taste buds or your liver. As Brits like James Bond might say (especially amusing because he has a license to kill -- get it?), cheers!