Drink and Learn -- The American Prohibition Museum and 220 Up 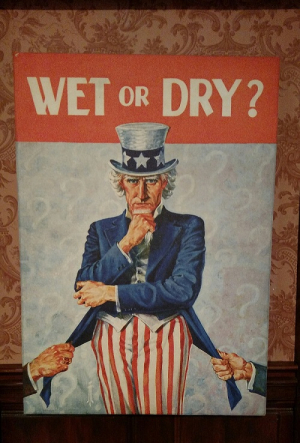 The American Prohibition Museum in Savannah, Georgia is not your typical museum.  For one thing, there's a great bar in the middle of it (more on that later).  The museum is informative without being dry (pun definitely intended).  You can learn a lot about this chapter in American history that formally began with the ratification of the 18th Amendment to the United States Constitution (the basis of Bootleggers Day) and ended with the ratification of the 21st Amendment (the basis of Repeal Day).

220 Up is the bar in the museum. You have to go through it in order to leave the museum.  In a clever way to maximize revenue, it's also open certain nights when the museum is not.  I love the concept of a bar in a museum.  It's appropriate for a museum about drinking legally; Prohibition involved a lot of other societal and political issues beyond the obvious.

Great bartenders such as Warren and Jason concoct some spectacular cocktails, and Ms. Cocktail Den and I had some fun conversations with them.  They're very good at engaging people with all levels of cocktail knowledge. During museum hours the bar menu focuses on Prohibition era cocktails such as the Mary Pickford, the 12 Mile Limit, and the Sidecar.

The evening bar menu has a number of intriguing cocktails (I enjoyed the Bar Room Smasher, my wife enjoyed the Blue Blazer).  Of course, you also can order a Prohibition themed cocktail or something completely different.

Drink and learn?  Learn and drink?  The order doesn't matter.  Just know the two of them make a winning combination in Savannah.