Orange Is The New Cocktail -- The Orange Satchmo 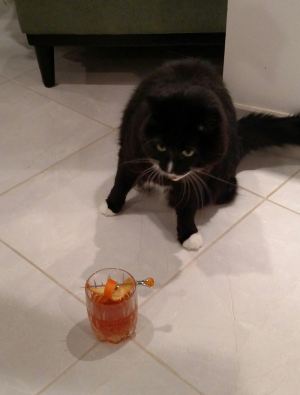 A photo with a cat and a colorful cocktail? It's a combination that could break the Internet.

Satchmo is the nickname of the late great musical legend Louis Armstrong.  It's also the name of our tuxedo cat. Neither of them has anything to do with the Netflix series Orange Is the New Black.  In case you're wondering, Satchmo is short for "satchel mouth," Armstrong's childhood nickname.  I learned about the Orange Satchmo in Benny Roff's book Speakeasy. Ms. Cocktail Den got it as a gift from a co-worker.

Put the absinthe in a chilled glass and swirl it around so you coat the inside of the glass. Discard the remaining absinthe. Place the other ingredients in a mixing glass with ice, stir with the silky growl of Armstrong's voice, and strain into the glass.  Orange twist garnish optional. 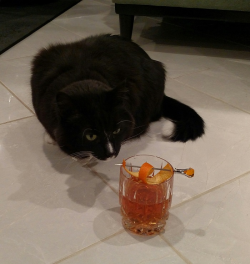 Try to take this drink from Satchmo and you will feel his wrath. Trust me on this.

The Orange Satchmo is a variation of the Sazerac.  The Sazerac is the official cocktail of New Orleans, the city in which Louis Armstrong was born (and the birthplace of the Vieux Carre and the Antoine's Smile). The Orange Satchmo is smooth because of the Cointreau (my favorite triple sec, which is a general term for orange liqueurs) and fewer Peychaud's bitters. If you want to increase the power, use my homemade arancello (orange liqueur) or sanguecello (blood orange liqueur) instead of Cointreau.

I have a soft spot for Louis Armstrong's music. Ms. Cocktail Den and I danced to his duet with Ella Fitzgerald (who also had a wonderfully unique voice) of "Dancing Cheek to Cheek" at our wedding. It's a memory I will cherish forever.  Will the Orange Satchmo give you that sort of a fond memory? There's one way to find out.

Yes, this cocktail has an odd name.  No, I do not know the widow for whom the drink is named.  No one does.  What we do know is the Widow's Kiss first appeared in a 1895 book from George Kappeler, an esteemed New York City bartender.  Even though it's not clear if he created the Widow's Kiss (many people presume he did), Kappeler definitely put it on the imbibing public's radar (yes, I know radar was not developed until 40 years later).  Many thanks to the Alley Cat Lounge in Savannah for introducing me to this liquid smooch. 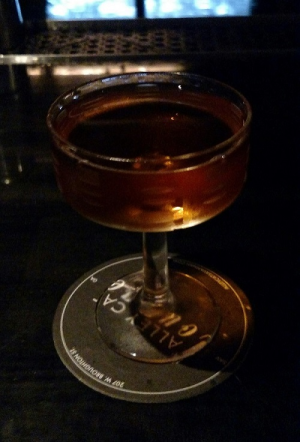 The Widow's Kiss at Alley Cat Lounge is intriguing, flavorful, strong, and not deadly.

Combine in a shaker with ice, stir with the solemn grace of a famous widow such as Jackie Kennedy, and strain into a chilled glass. Luxardo cherry garnish optional.

The Widow's Kiss is high powered. No ingredient has less than 40% alcohol by volume (ABV).  If you want to go all French use Calvados, an apple brandy from the region in France.  I recommend using yellow Chartreuse (a component of other cocktails such as the Renegade) because it's 40% ABV and slightly sweeter.  If you have to use green Chartreuse (55% ABV; you'll use it in drinks like the Last Word), use no more than .5 ounces.  The Widow's Kiss should smooch your liver, not kill it. There is no real substitute for the Benedictine DOM (not the same as B&B), which you also can use in classics such as the Vieux Carre or originals such as the Mooch.

A Field Guide To Bad Cocktails

Do you want to avoid bad cocktails?  Of course you do.  David Wondrich, a preeminent cocktail authority of our time, recently published this article in the Daily Beast.  It's entertaining, informative, and occasionally self deprecating.  As a self styled "professional amateur" home bartender, it's good to know people with far more cocktail knowledge and sophistication than I have, e.g. David Wondrich (the author of Imbibe and other works), occasionally make colossal mistakes.  It's sort of like watching a Gold Glove award winner in baseball boot an easy ground ball. 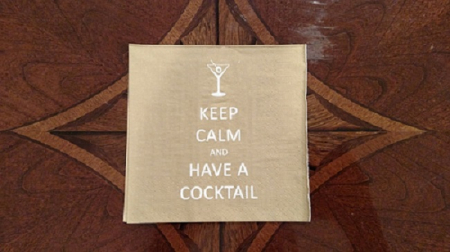 I heartily agree with Wondrich's classification of bad cocktails as either strategically bad or tactically bad.  With the former the idea is a disaster, with the latter the idea is solid but the execution is a disaster. It happens to everyone.  I am no exception.  For example, the first time I made the Cancer Killer #2, I used too many orange bitters and damn near took out multiple people (my apologies to Ms. Cocktail Den, as well as my friends Ilan and Stephanie).  After some tinkering a tactically bad cocktail became a good cocktail.

Let me paraphrase the advice I give to newer attorneys (I'm an attorney) -- It's not a question of if you will screw up a cocktail.  The questions are when you will screw up, how badly you will screw up (it will make for a great story later), and most importantly, how you recover.  Just keep on cocktailing! 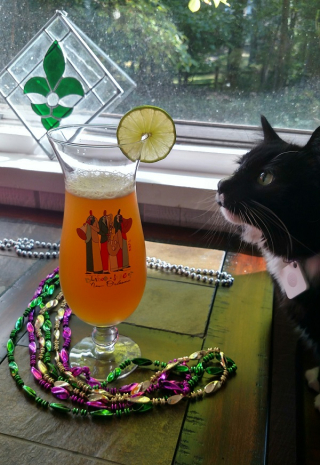 The Hurricane is associated with New Orleans, not the 1980s rock anthem from Scorpions. It's not the official cocktail of the city. That honor belongs to the Sazerac.  Like many people, I had my first Hurricane at Pat O'Brien's. I didn't like it at all, so I avoided it for a long time. A couple of years ago my friends Chuck and Tom encouraged me to have one at the Old Absinthe House in New Orleans.  It was awesome.  There are many variations of this famous (infamous?) cocktail.  Here's my simple, colorful, and potent version.

Combine in a shaker with ice, shake with the force of a Category 5 hurricane, and strain into a chilled glass.

You'll see in the picture I used a traditional hurricane glass (our cat's name is Satchmo, so his presence fits right in with other New Orleans staples like the fleur de lis and Mardi Gras beads). Increase the amounts of the respective ingredients if you use that type of glass. If you're able to use all fresh fruit juices (something I definitely recommend), you could add a small amount of super simple syrup to give the Hurricane a hint of sweetness.

Want to buy me a good Hurricane (and are you familiar with the song)?  Here I am.