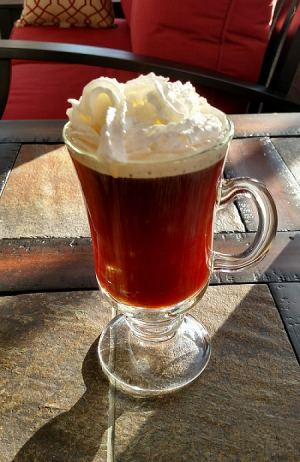 Today is National Irish Coffee Day, which celebrates a cocktail that doesn't actually have green booze.  In 1943 Joe Sheridan created the Irish Coffee in order to warm passengers at a flying boat (seaplane) terminal in Foynes, Ireland.  The drink's popularity exploded after travel writer Staton Delaplane got it on the menu at the Buena Vista Cafe in San Francisco (Sheridan later worked there). Purists may scoff at my take on the Irish Coffee (does that make me a Scofflaw?).  I'm fine with that because my version is simple, easy to make, and most importantly, Ms. Cocktail Den loves it.

Pour the coffee into a glass, add the other ingredients, and stir with the tranquility of the rolling Irish countryside.  Top with whipped cream.

I don't drink coffee (I know, I'm weird), so I suggest using whatever you prefer, especially if it has a robust flavor.  The same goes for the Irish whiskey. While I've featured Jameson in other posts such as the Intense Irish and Sine Metu, keep in mind there are a lot of other Irish whiskies on the market.

Traditional Irish Coffee is very good (we had some in Dublin), but it's more labor intensive.  Whether you prefer the traditional version, my easy version, or something else, the Irish Coffee is a great booze boost for your caffeine boost. Sláinte!

A Whiskey Closer -- The Final Rye

Closing is important in things such as real estate (remember "ABC" from the play and film Glengarry Glen Ross -- always be closing) and baseball (relief pitchers can make or break a game).  The same goes for cocktails.  The Final Rye is a variation on the classic alcohol forward Last Word.  Thanks to Edgar's Proof & Provision in the DeSoto Hotel in Savannah, Georgia for introducing me to this drink. 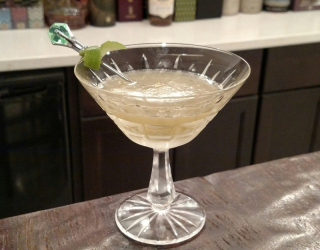 Combine in a shaker with ice, shake with the icy ferocity of Alec Baldwin in the movie version of Glengarry Glen Ross, and strain into a chilled glass.  Lime garnish optional.

The Final Rye simply substitutes rye for the gin in the Last Word.  The other ingredients and proportions are the same.  This drink is very good, and it's perfect if you have a visceral aversion to gin (I encourage you to try the original anyway).  Either one is a great combination of strength, sharpness, and sweetness.

So whether you plan to shut 'em out or seal the deal, the Final Rye is for you. 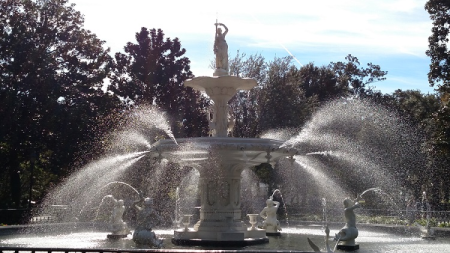 There's no booze at the fountain at Forsyth Park in Savannah, Georgia.

Savannah is a small Southern city with a big drinking tradition. The Alley Cat Lounge is one of the great cathedrals of Savannah's cocktail renaissance. You have to respect a place that has "We love booze, and so do you" as its motto. Ms. Cocktail Den and I went there the first night we were in town, and we had such a great experience we returned twice. 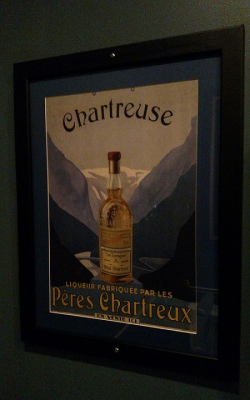 Alley Cat's appreciation of booze extends to the art on the wall of the mens room.

If you've read my reviews of other bars, you know I usually focus on two things -- drinks and people.  After extensive testing over three nights, I can tell you the drinks are top notch across the board. Some of the cocktails will be the feature of other posts.  Take your time reading the lengthy drink menu, which looks like a newspaper.  I appreciate that because I'm sort of old school in that I actually read a newspaper (kids -- think of a newspaper as a prehistoric Facebook feed without a power source ha ha).

Besides creating some fine cocktails, the people behind the bar are friendly and knowledgeable.  You have to be knowledgeable if there are more than 100 cocktails on the menu, many of which you won't find in 99.9% of other bars.  Fortunately the bartenders will share their knowledge and make recommendations without being pretentious.  That attitude is emblematic of the Alley Cat Lounge -- seriously good drinks without taking itself too seriously.

South Of The Border Antibiotic -- The Mexicillin

Continuing a tradition, a new year brings a new original creation from the Wulf Cocktail Den.  The Mexicillin is a twist on the popular Penicillin.  The name's resemblance to the common antibiotic amoxicillin is completely intentional.  While the name of the cocktail isn't entirely original, my recipe is. 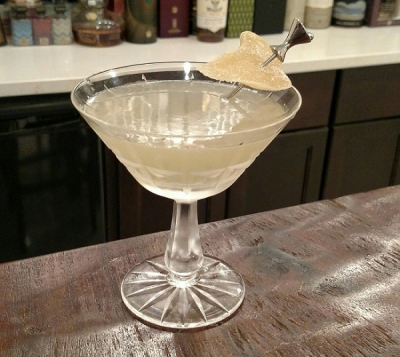 Combine everything except the mezcal in a shaker with ice, shake con fuerza de amoxicilina, strain into a chilled glass, then float the mezcal on top (hold a spoon upside down over the glass and pour slowly).  Candied ginger or lime garnish optional.

The Mexicillin swaps tequila, mezcal, and lime for the two types of Scotch and lemon in a Penicillin.  Both tequila and mezcal are Mexican liquors derived from the agave plant (although tequila must come from a blue agave), but it's the production process that gives mezcal its smoky flavor.  Just as smoky Scotch gives the Penicillin an extra dimension of flavor, mezcal does the same for the Mexicillin.

As with the Penicillin, you have two options for the ginger.  You can use .5 ounces of a ginger liqueur such as Barrow's Intense (full disclosure -- I am a small investor), or muddle two or three small pieces of fresh ginger in the shaker before adding the other ingredients.  For the honey syrup, follow the recipe I used for A Thief In The Night.

Want some south of the border cocktail fun?  Then prescribe yourself a Mexicillin.