New Year's Eve  --  a time for reflecting, a time for hoping, and a time for drinking cocktails.  Champagne is a staple of New Year's Eve celebrations, and the Champagne Cocktail is a great way to use it.  The cocktail originated in the United States in the 1850s.  It was, and is, a simple year round cocktail. 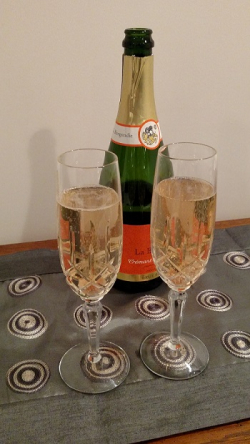 Place the sugar cube in a champagne flute, add the bitters, then add the sparkling wine.  Stir briefly if at all.

The Champagne Cocktail lends itself to variations.  For example, the sparkling wine can make a difference (use what you like and can afford).  Also, you can add a half ounce of brandy and/or use Peychaud's bitters (a key part of the Sazerac) instead of Angostura bitters.  If you want to use sparkling wine in a different way, try a Kir Royale.  Or if you want a cocktail with a tenuous link to New Year's Eve but without sparkling wine, try a Bobby Burns (he wrote "Auld Lang Syne"). 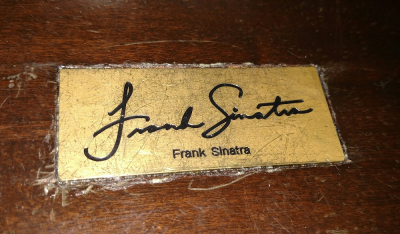 The Chairman of the Board has a seat at the bar at BlackTail.

BlackTail is a vibrant New York City bar that evokes the glamour of 20th century aviation (when passengers frequently dressed up to fly) and Cuba (during Prohibition and before the Castro regime).  Voted as the Best New American Bar during the 2017 Tales of the Cocktail, the bar's name comes from the distinctive tail fins of the planes of Aeromarine Airways, a luxury airliner that flew Americans to and from Cuba. 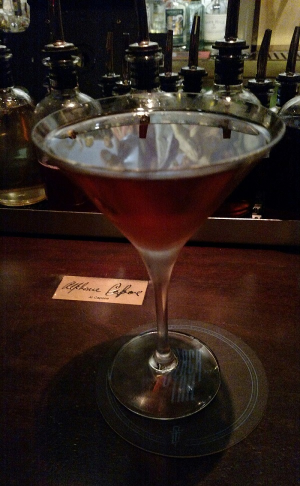 And so does the real Scarface.

But enough about the back story.  How are the drinks?  In a word -- spectacular.  Take your time going through the extensive selection.  Ms. Cocktail Den and I spent a good part of a weekend evening savoring a number of cocktails. Personal favorites included the Baccarat (bears no resemblance to the card game played by James Bond), the Whizz Kid (a fascinating mix of bourbon, cognac, cachaça, amaro, vanilla, and cherry), and the El Presidente (I admit their version with a base of two rums and mezcal is superior to mine). While you can stick with traditional Cuban libations such as the Daiquiri, I encourage you to explore what else BlackTail has to offer.  Many of the drink combinations look strange on paper, but blend together nicely when you taste them.

The atmosphere at BlackTail is dynamic, and the attention to detail is phenomenal.  For example, calling the menu a "menu" does not do it justice.  It's really a wonderfully illustrated history book that describes how the legendary gangsters Meyer Lansky and Lucky Luciano (two true Scofflaws) turned Cuba into a moneymaking empire of sun and sin. Fortunately Ms. Cocktail Den talked me out of "liberating" one of them.

To paraphrase the title of one of my favorite Frank Sinatra songs, come fly away -- to BlackTail.

To paraphrase President Franklin Roosevelt's description of the attack on Pearl Harbor, December 5, 1933 is a date that will live in awesomeness.  On that day the 21st Amendment became official, Prohibition ended, and once again Americans could drink legally. 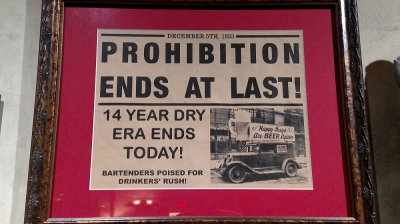 Embarking on my journey as a cocktail consultant, I recently had the honor of designing a cocktail menu for my friend Chuck's company holiday party. The party's theme is a 1920s speakeasy.  Of course many speakeasies flourished during Prohibition, which lasted from 1919 to 1933. Keeping these things in mind, here's what I recommended:

Scofflaw -- This is the perfect cocktail for Repeal Day.  Besides being a great drink (one of my favorites), both the cocktail and the word originated during Prohibition.

Boulevardier -- As the name might suggest, it came out of France (specifically Paris) in the 1920s.  Even better, it only has three ingredients and is easy to make.

Mary Pickford -- An American bartender created this in Havana during the 1920s and named it for the first famous Hollywood actress.  Don't let its light and refreshing taste fool you.

Hanky Panky -- I love the name of this one. Like the Scofflaw, Boulevardier, and Mary Pickford, it came about during the 1920s. The history behind it is quite interesting, as a lady bartender created it during a time when lady bartenders were rare.

Man O'War --  Named for a champion racehorse at the beginning of the 1920s.  Like the other cocktails in this list, it's tasty, assertive, and effective.

Racketeer -- There were plenty of these people during Prohibition (Al Capone probably is the most famous one).  Fair warning -- the drink is very strong, and it's worth every last sip.

So grab a cocktail, celebrate the end of Prohibition, and revel in the ability to drink legally!  Cheers to Repeal Day!