So Good It's A Crime -- The Racketeer

A lot of colorful people, both real and fictional, have been and are racketeers.  The word (it means someone who's engaged in an illegal business) isn't used much anymore (it dates to the 1920s) and usually refers to someone in organized crime.  Even Bugs Bunny posed as one in the 1946 cartoon Racketeer Rabbit.  The Racketeer cocktail isn't nearly as old as the word, as it seems Stephen Cole created it no later than 2009.  Thanks to the Floppy Disk Repair Company (part of the Stranger Things in Austin) for introducing me to the Racketeer. 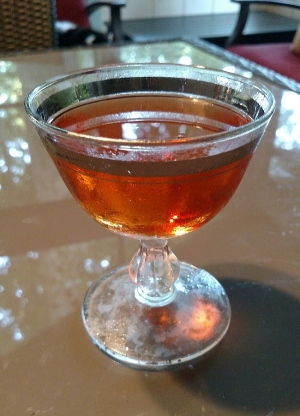 Rinse the inside of a chilled glass with a smoky Scotch (I used Laphroaig).  Combine the ingredients in a shaker with ice, stir with the intense purpose of an aspiring you know what, and strain into the chilled glass.

The Racketeer is a very strong drink.  It contains rye (like the Scofflaw, another criminal themed cocktail), mezcal (tequila's smokier cousin) and two herbal liqueurs -- none of which are even remotely weak.  Fortunately the Benedictine DOM and sweet vermouth keep the Racketeer from fitting you with cement shoes ..... alcoholically speaking. The many ingredients may seem exotic, but you can find them at most liquor stores.  Like most tricky scores, the payoff is worth it.

So what can you do as you have a Racketeer? If you film tastes run towards something more serious than Bugs Bunny (I love classic Warner Brothers cartoons), I suggest a classic like The Godfather (my favorite movie and the inspiration for the Lupara) or The Sting.  Depending on what music you like, you can listen to songs such as Bad To The Bone by George Thorogood or Smooth Criminal by Michael Jackson.

Don't have too many Racketeers at once.  We don't want you to have to take the Fifth (not a fifth) and need a lawyer.

This is a terrific recipe. Classically, a cocktail containing all spirits should be stirred. Introduce juices, shrubs, egg whites etc., and you shake. Whatever you like best is best though.

For a variation, omit the Sweet Vermouth. Boozier, drier, flavors are more focused and the smoke shows up more.

I had most of the ingredients except yellow chartreuse, scotch, & mescal (but I had tequila). I took the plunge and bought the exorbitantly priced yellow chartreuse thinking I could at least have a trial run at the drink ( I love Veuix Carre's so the Rye, Benedictine mix are a fave and I love Rye and sweet vermouth in Manhattans so I felt it was worth the investment...hopefully). It was really good and I can see how the smokier mexcal plus the edition of the smoky scotch would make the drink even better. A group of us that have done weekly dinners in the past are hoping to meet up again soon (half of us have had our covid vaccines and the number of infections have gone down in our state) and I think I may have this as my contribution to our 1st dinner back. It is strong though, whew!

The Racketeer is a very strong cocktail, no doubt about it. I'm glad you took the plunge and bought the yellow Chartreuse. It definitely is expensive, but it's high value. A little goes a long way, and you can use it in all sorts of cocktails in addition to the Racketeer. I'm sure you are looking forward to when your group can meet again in person. Cheers!

Ever try a godfather cocktail.
Its 1 shot eye or maybe 2
1 shoot ammorta on ice in Roxbury glass