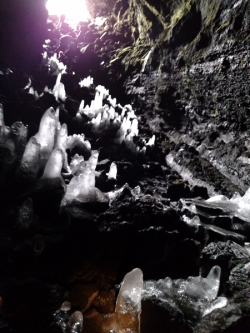 Ice in Iceland -- an ice cave in Surtshellir.

Even though Reykjavik, Iceland isn't a big city, it has a lot of great eating and drinking options. Apotek and Loftid are two of them. Friends highly recommended Apotek to me and Ms. Wulf Cocktail Den, and we discovered Lotfid while walking around the neighborhood.

Like Kol, which is the subject of a prior post (link), Apotek is first and foremost a restaurant.  Ms. Wulf Cocktail Den thinks the lamb filet we had there was the best lamb we've ever had (I agree), and I could go on all day about the fabulous fish, e.g. arctic char and minke whale.  But you're not in the Den to read about food.  The cocktails are excellent and creative.  I applaud Apotek for incorporating Icelandic spirits into the drinks.  Some of the spirits are familiar to many, e.g. Reyka vodka, and some are not, e.g. Brennivin (a clear liquor, technically an aquavit, also known as "Black Death"). Our first meal in Iceland happened to be at Apotek, and we enjoyed our experience so much we had our last meal in Iceland there, too. 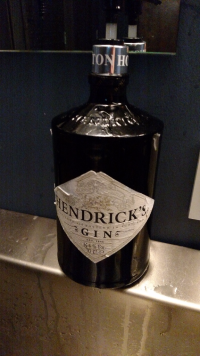 Even the soap dispensers at Apotek are alcoholic.

Unlike Apotek, Loftid is a bar and club.  Interestingly, you have to be at least 25 years old to enter the place. Presumably it does this to keep out younger drinkers (apparently Reykjavik has quite a party scene) and entice "classier" (?) drinkers like me and Ms. Wulf Cocktail Den.   We went there on a Sunday night so it was pretty quiet.  The bar is well stocked, and the drinks on the handwritten list on the wall (there is no printed list) are good.  They aren't nearly as complex as those as Apotek.  This is not surprising, as Lotfid is set up to operate as a high volume bar.

The highlight of Loftid was meeting a young bartender named Johann.  He clearly has the desire to succeed and the potential to become a great bartender.  He just needs more exposure to classic cocktails, e.g. he confessed he never made a Manhattan, so we walked him through the version we prefer.

Our experience at Loftid involved the three Cs I love about the world of cocktails -- creating them, communicating about them, and connecting with people through them.  If I can do that in Reykjavik, you can do it anywhere.

Posted at 11:17 AM in Bars and Restaurants, Current Affairs, Travel | Permalink | Comments (0)