Drink iconically in Paris!  Both of these legendary bars predate the great movie Casablanca, which is the source of many classic lines, e.g. the subject title of this post.   One night in Paris my wife and I visited these historic bars to soak in some history and cocktails (not necessarily in that order). 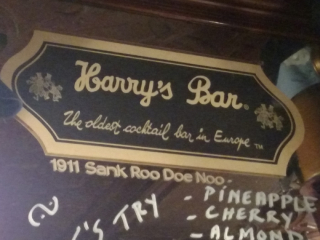 Harry's Bar opened in 1911.  American expats and visitors initially formed the bulk of its clientele.   Notable people who have imbibed there over the years include Humphrey Bogart (one of the stars in Casablanca) and Ian Fleming (author of the James Bond novels; in Casino Royale 007 refers to Harry's as the best place in Paris for a "solid drink").  Despite its American origin, Harry's is named for Harry McElhone, a Scotsman who tended bar there in the 1920s.  My wife and I were pleasantly surprised that most of Harry's current patrons were native French speakers, or at least they were the night we were there.

Our experience at Harry's was worthwhile but not worth repeating.  The cocktails certainly were above average and the bartenders were proficient.  However, the service and atmosphere were perfunctory.  We didn't feel like we were being pushed out the door, but nothing about Harry's invited us to stay, linger, and have another drink or two. 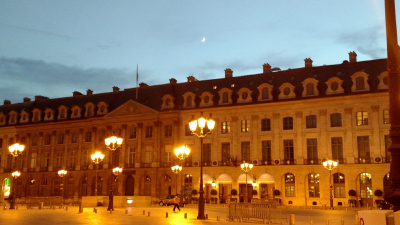 The Bar Hemingway at the Ritz Paris hotel is named for that Hemingway (the inspiration for the Hemingway Daiquiri).  The bar was in business before Papa started drinking there, but he supposedly liberated it from the Nazis towards the end of World War II.  The place oozes class, elegance, and discretion.  For example, you can't take photos and there is an informal dress code.

The Bar Hemingway is fairly deep inside the hotel.  The journey is worth the very expensive cocktail or two.  Once my initial sticker shock wore off, I was able to appreciate our finely crafted drinks. Unlike the vibe in Harry's, the atmosphere in the Bar Hemingway felt more welcoming, e.g. the bartender was delighted to have us sample the house ginger essence.

Bottom line -- Harry's and Bar Hemingway both blend cocktails and history, but if you have to pick one (and can afford it), follow Papa's lead.