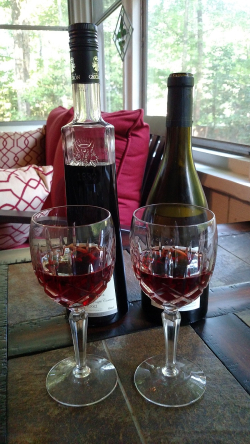 The Kir is a ubiquitous cocktail in France, and it increasingly appears on American drink menus. It was Ms. Wulf Cocktail Den's go to cocktail during our recent journey to Paris.  The drink is named for Felix Kir, a priest who was active in the French Resistance in World War II (he is credited with orchestrating a prison break of Allied prisoners).  After the war Kir became the mayor of Dijon, a town in the Burgundy region, and he created a concoction of local white wine and crème de cassis (blackcurrant liqueur).

Pour the crème de cassis into a wine glass, then add the wine.  Très simple, oui?

Technically you should use white wine from Burgundy, but realistically you can use any white wine that's dry and doesn't have an oak flavor.  The ratio of the ingredients is really a matter of taste. Ideally you want the Kir to be a little sweet and a little dry.

Have a Kir, raise your glass, and toast to resistance against bad cocktails!