Getting It In -- The Last Word

You want to have the Last Word?  Of course you do.  Now you can have it in a conversation and in a cocktail. Although many sources refer to the Last Word as a Prohibition era cocktail, it actually predates Prohibition (it appeared on a drink menu in Detroit no later than 1916, and Prohibition went into effect in 1920). Interestingly, its creator was not a bartender.  Frank Fogarty was a popular vaudeville stand up comedian, so maybe the name of the cocktail was linked to his occupation. 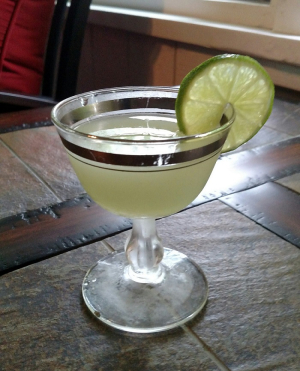 Combine in a shaker with ice, shake with the energy of a stand up comedian working the crowd, and strain into a chilled glass.  Lime garnish optional.

The Last Word is refreshing yet potent.  A lot of its potency is due to the green Chartreuse, an herbal liqueur from France.  There are two types -- green and yellow.  The green version is higher proof and has a tart flavor, and the yellow version is lower proof (but still quite strong) and a little sweet.  You'd think combining green Chartreuse with fresh lime juice and gin would make the Last Word overpowering.  That's why you bring in the maraschino liqueur.

Good thing the Last Word came back into the limelight (pun intended) about 10 years ago.  Now you have a great way to begin, continue, and end your cocktail "conversation."