A Smashing Success With Booze -- The Intense Smashed Julep

It's the time of year when many Americans briefly focus on horse racing.  And what cocktail is associated with the Kentucky Derby, the most famous race?  That's right -- the Mint Julep.  There's certainly nothing wrong with having a Mint Julep or two, but winners don't always stay with the pack. Break from the pack and try an Intense Smashed Julep. 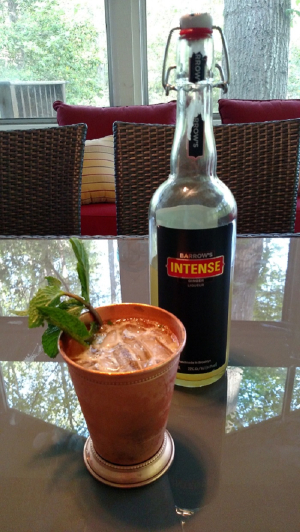 Muddle the mint and lime at the bottom of the shaker, add ice and the other ingredients, shake like you're thundering down the homestretch, and strain into a glass filled with crushed ice.  Mint garnish optional.

Describing a cocktail as a smashed julep is sort of redundant.  Technically speaking a smash is a class of cocktails and a julep (the word derives from an old Persian word for rose water) is a subset of a smash.  As I understand it, a julep contains a spirit, sweetener, herb, and ice, and a smash contains all of those things and fruit.  In other words, all smashes are juleps, but not all juleps are smashes.

But enough of this horsing around with cocktail semantics.  Have fun, get Intense, and get smashed.