Wulf Cocktail Den
Home Archives About Subscribe
Bombs Away -- The Brown Bomber
No Pain, No Gain -- The Painkiller

Who is the Whiskey Queen?  My lovely wife, aka Ms. Wulf Cocktail Den, aka the Den's operations chief, taste tester, and social media consultant.  The tradition of kicking the new year off with a new original creation continues.  My wife is a Whiskey Woman, Bourbon Babe, and Scotch Siren (I definitely would see superhero films with those characters).  She is particularly fond of bourbon and Scotch, so the Whiskey Queen incorporates both of them. 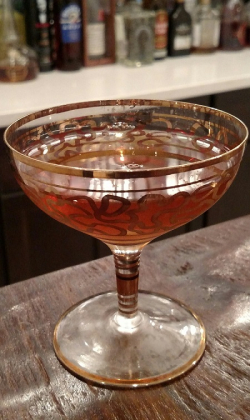 Combine in a shaker with ice, stir with a true queen's combination of badass power and majestic grace, and strain into a chilled glass.

Use your favorite bourbon, but stay away from ones that are more than 100 proof.  The Whiskey Queen should be strong, not lethal.  Similarly, using a blended Scotch instead of a single malt Scotch will reduce the odds of the cocktail going the way of Anne Boleyn. As with a Royal Blood, don't use a smoky Scotch in a Whiskey Queen. I used Benedictine DOM because, like the peach bitters, it is a component of the Royalist.  Don't let the herbal sweetness fool you -- Benedictine's alcohol content makes it almost as strong as bourbon or Scotch.  You can (and should) get peach bitters online, and Bittered Slling makes the best product.

Whether your taste runs towards queens of the Elizabeth II variety or the Freddie Mercury variety (get it?), the Whiskey Queen is a tribute to the queen or king in your life.

I need to try this! All hail the Queen!

Yes, you need to try this. I'm sure you'll love it!

I'm delighted to see you like it. Thanks for sharing it with your guests! At which Doubletree do you create drinks? I might have to drop in if I'm in the area.