The Algonquin Round Table was not a table. It was a rotating group of clever people in the literary and acting worlds who met for lunch at the Algonquin Hotel in New York City.  I didn't recognize the names of most of the people in the group. The only person I immediately knew was Harpo Marx of the Marx Brothers (their movies are dated but hilarious).  The vast majority of the Algonquin Round Table's activities occurred during Prohibition, so there wasn't any (official) drinking.  That didn't stop someone at the hotel from creating this cocktail. 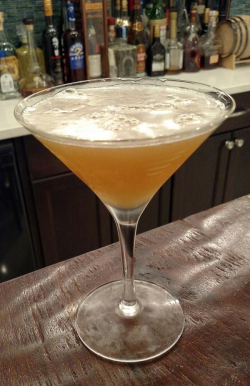 Combine in a shaker with ice, shake as if you're sparring (verbally) with a famous writer or actor, and strain into a chilled martini glass.

These seemingly disparate ingredients result in an oddly tasty and bracing cocktail. Some people like to add a dash or two of orange bitters.  On its own the Algonquin is pleasantly bitter.  Rye and dry vermouth certainly aren't sweet, and fresh pineapple juice isn't really sweet.  I mention all of this because adding too many dashes of orange bitters, or adding an inherently tart orange bitter, could make the Algonquin a harsh drinking experience.