Bombs Away -- The Brown Bomber 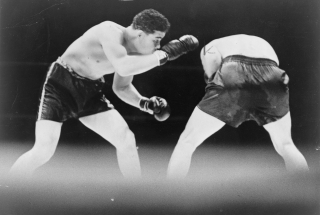 The drink is not explosive or dangerous, unless you have too many of them.  It is a tribute to Joe Louis, the late American heavyweight boxer.  Known as the Brown Bomber, Louis was the reigning champion for 140 consecutive months in the 1930s and 1940s, and he had 23 knockouts in 27 title fights.  Talk about staggering numbers (literally, if you were in the ring with him).  Jim Meehan at PDT in New York City created the Brown Bomber, and this is my variation. 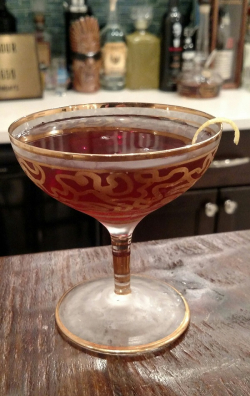 Combine in a mixing glass with ice, stir with the deliberation of of a boxer dismantling their opponent, and strain into a chilled glass.  Lemon twist garnish optional.

Most versions of the Brown Bomber call for bourbon or rye, Lillet Blanc (a French aperitif), and Suze (a Swiss gentian root liqueur).  I substituted dry vermouth for the Lillet Blanc, and Averna or Campari for the Suze because I like those liquors much more than I like Suze.

The Brown Bomber isn't far removed from a Boulevardier in that both cocktails have a whiskey, vermouth, and an amaro.  Similarly, the combination of whiskey and dry vermouth is reminiscent of a Scofflaw. If you want a boxing relating spirit that's sweeter but just as strong, try my pugilecello.

The Brown Bomber isn't sweet. But like its namesake, it is powerful and classy.