Do you know a nasty woman? Donald Trump called Hillary Clinton a "nasty woman" during the last Presidential debate. I did not watch any of the debates (deliberately vague full disclosure -- I dislike one candidate and despise the other). However, I did watch the very funny Saturday Night Live sketches of the debates, including the last one that spawned Trump's comment and ultimately this cocktail. Many thanks to Jenni Avins who created this drink and posted it on the Quartz website. 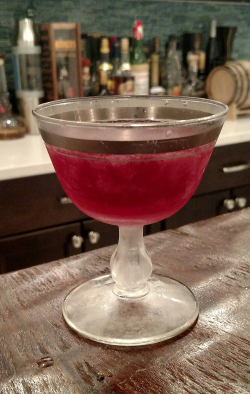 Combine in a shaker with ice, shake with (I could go 10 ways with this considering the drink name and the political climate), and strain into a chilled glass.  Lime garnish optional.

Pairing cherry juice, which is a key component in the National, with tequila seems odd, but the Nasty Woman makes it work (that sounds bad, doesn't it?).  This cocktail takes the Cointreau or Grand Marnier out of a Margarita and brings in cherry juice.  The result is a little sweet, a little tart, and very powerful.

If you're not in the mood to watch or discuss politics, I suggest watching Cleveland from Family Guy ("that's naaaasty") or listening to some tunes from Janet Jackson (Ms. Jackson if you're nasty).  And when the election ends and/or you're out of tequila  -- have an El Presidente.

Hmmm....Mr. Bond, I think I'd reconsider either shaking or stirring a "Nasty Woman." Never wake a sleeping babe, as the adage goes.