Wulf Cocktail Den
Home Archives About
Tasty, Political, and Timely -- The Nasty Woman
How To Drink On Thanksgiving Do you know a bad hombre?  During the last Presidential debate in which Donald Trump called Hillary Clinton a Nasty Woman he referred to "bad hombres" who crossed the border from Mexico into the United States.  Naturally Saturday Night Live made fun of the comment.  My friend Chuck suggested I make a Bad Hombre cocktail.  There are a couple of versions online, but none of them contain any ingredients from Mexico.  My original creation does. 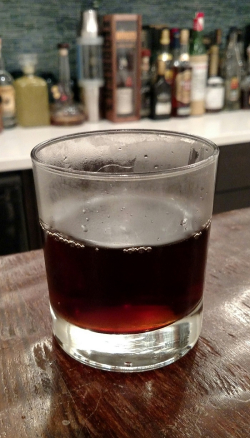 Combine a shaker with ice, stir with the satisfaction of being a bad (in a good way) cocktail maker, and strain into a chilled glass.

Do you want musical accompaniment for this cocktail?  Possible choices include diverse artists such as George Thorogood ("Bad To The Bone") and Michael Jackson ("Bad").  If you were supposed to shake the Bad Hombre (you shouldn't because it would violate the Hamlet Cocktail Conundrum), you could play "Macho Man" by the Village People (look at the post's subject title again).

Here's a question -- does this post make me El Lobo Loco (the crazy wolf), El Lobo Malo (the bad wolf), or both?