How About Them Apples -- The American Apple

Apples, cinnamon, and whiskey.  Any one of those flavors can evoke the autumn season.  Combine them into a drink, and you'll definitely fall (pun intended) for the result. You don't hear the phrase "how about them apples" much anymore (to my non-American readers -- it's an expression that means "what do you think about that?"), but as Matt Damon showed us in this scene from Good Will Hunting, sometimes it really hits the right note.

The American Apple is my variation on a Canadian whiskey based cocktail recipe I saw on the barnonedrinks.com website. 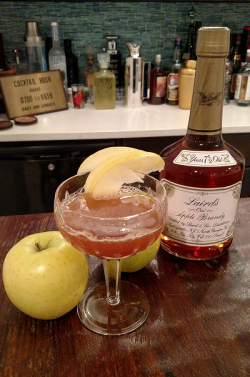 Combine in a shaker with ice, shake with Will's swagger, and strain into a chilled glass. Apple slice garnish optional.

Apple brandy also plays a prominent role in cocktails such as Antoine's Smile and the Corpse Reviver #1.  It is similar to, but not the same as, applejack. Laird's makes both spirits (it's all about comparing apples to apples). You can use applejack, but the American Apple will taste a little different, just as it will be different depending on whether you use bourbon or rye.  Bourbon is a liquid example of American exceptionalism, and rye is a liquid example of an American comeback kid. You win either way.

So how about them American apples?