Wulf Cocktail Den
Home Archives About
How About Them Apples -- The American Apple
Tasty, Political, and Timely -- The Nasty Woman 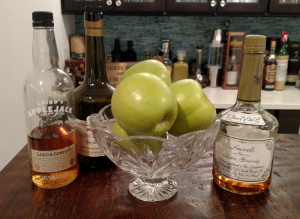 So what's the difference?  Traditionally it's a matter of hot and cold.  Apple brandy uses the regular distilling process. This involves heating the cider so that the alcohol evaporates, capturing the vapor, and cooling the vapor so it becomes a liquid again.  Applejack involves freezing the cider and siphoning off the liquid alcohol after the water freezes.  Both processes separate the alcohol from the water by exploiting their different boiling or freezing points.

Fortunately modern applejack doesn't have this problem. Laird's (the only applejack producer of which I am aware) applejack consists of  35% apple brandy and 65% neutral grain spirits. In comparison, apple brandy is exactly what it sounds like.

Now you can compare apples to apples. Cheers!