Sweet And Sour (not chicken) -- The Bourbon Triple Sour

The words "sweet and sour" make you think of chicken, right?  But the Den isn't about chicken.  Any protein mentioned in the Den is in a cocktail (click the Protein link on the right).  "Sweet and sour" also applies to a well balanced cocktail such as the Bourbon Triple Sour.  Thanks to a post on the Reddit site and imgur.com for introducing me to this cocktail, the recipe for which I slightly adapted. 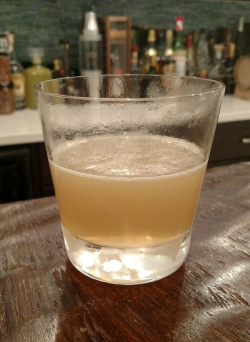 Combine in a shaker with ice, shake with the frenzy of a chicken running away from a sharp knife, and strain into a chilled glass.

The Bourbon Triple Sour is a variation on the classically sharp Whiskey Sour.  Just as a Midnight Train is a Whiskey Sour with Averna, this version of the Bourbon Triple Sour is a Whiskey Sour with Cointreau.  The original recipe calls for "triple sec" (an appellation for an orange liqueur), and I'm a big fan of Cointreau.  It's the Cointreau, super simple syrup, and possibly the bourbon you use, that makes this cocktail a little sweet.   Incidentally, the original recipe calls for equal proportions of bourbon, triple sec, and lemon juice.